So, bought this a few months ago from 111Paul111 with mods already done and requiring extensive welding required to the rear, front end is spot on, engine just needs a new service and alternator belt and general tidying carrying on from where he left off.

After much thought and talking with the right people, it's being re-shelled as the cost is considerably less so here's the pictures as it stands

I'm aiming for a 500bhp figure as it's a second car which won't really do too many miles. No rush, car will be a nice clean example while I source the parts and taken to meets, shows, trackdays and drag days. Trying to get a pace fmic as I don't want to chop the new shell at all, smaller wheels and brakes, getting rid of the tein as top mount bearings are shot on the front + they are too hard for my roads here, any suggestions on softer better coilovers and smaller brakes to fit 16s? D2s look good but not sure on the brake set up.

Already hit a 12.7 on nankang tyres @ 112. Aiming for considerably less next time. 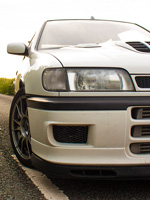 @Digitalfaze wrote:really nice those wheels and brakes are massive! any closeups of them?

They are K-Sport 8-pot and do half stop, possibly the best brakes I've ever used but they are budget big brakes at £900, not sure how long they will last or if they take a 10 lap, hard braking track well (don't want to find out) but I can't fit smaller wheels until I get smaller brakes.

Few pics from my phone, apologies the quality is no way near that of my dslr and colours way off.

Put my size 8 in this one for reference, didn't think a 50p would cut it

Funnily enough, just waiting for my shipping man to confirm we are go go go. Just sorted the financials today and it's no expense spared as I need to get it to such a high standard to pass a manx test.
Not sure if Samo is on here but he's on another GTI-R forum and the shell was fully restored and featured in *cough* Max Power I think but it's what I need, clean, straight and standard and in mint condition.

if your looking at 500 ponies youll need to do quite a bit to achieve that power and that would include a transmission change to something more suitable such as quaife or dogbox, plus obviously a suitable clutch.

I had the k sport brakes a few years ago and would never buy another set as the materials used to make them are really crap tbh.
I managed to warp my new discs in just one trackday then got them skimmed then they warped again on the next one lol, fine for road use but not track.

with regard to coilovers
without a doubt the best you will get are the bc coilies and you can specify your own spring weights when ordering (stock rates are too hard for the gtir))
if you need a set then give us a shout as we are agents for bc and you wont get cheaper anywhere new.

Settled! K-Sports are going. think the discs may already be warped as it pulls left under heavy braking whilst my brain decides if I should loose my internal organs or counter steer. Any suggestions on a replacement to fit under a maximum 17" alloy taking in mind my power figure? Gonna need front and rear.

I'm still researching parts and turbo's at the moment, plenty of build threads with good and bad in them. I need to tidy the cheap parts such as the air filter and pipe which moves around, so waiting for a dry day to design a bracket from cardboard to get made.
The FMIC I'm desperately trying to get a pace, messaged the guy on ebay who had it with a low ball offer.

I'll be in touch about the BC's a friend said they are pretty good without spending lots of money, things like that I just get them to my mates and the pick them up when I'm over in the car. Unfortunately can't get a car shell in one

That's costing me a whack. But on a brighter note it has an SAFC II AVCR whatever that is it sounds good

@GTI-R US wrote:avcr is good
safc11 not needed old hat now and cant alter timing through it.

I'll drop you a PM with parts

@Gl3nnGTIR wrote:Nice car mate and love the photos would love to take some pf mine around that sort of backdrop :)need to finish building the thing first

When you're done, come over here for a few days and I'll show you round the backdrops and over the mountain (no speed limit). If you're into Rallying there's rally's every few months and you can get right up into the action.

@Concrete-GTIR wrote:Looks good mate, did realise that 11paul11 was selling his car he was on here a bit then didn't see him as he used to post quite a bit, wondered if he sold it

Yeah, was up for sale. I had a look at the problems he'd had and fixed and the price was good. Car is generally in good nic and set up very well as you can see form the pictures, it's just the rear end but it's far easier to just re-shell it into one that's already mint and had everything restored.

Posts : 251
Join date : 2013-10-27
Age : 35
Location : The home of no speed limits & fairies
Driver side suspension turret has a small hole
Rear arches
Underside of the boot
Rear of the sills
passenger side rail skew wiff

£2500 to restore or £1800 to re-shell... tough choice. Getting the subframe off my car, blasting it and having it powder coated along with a few other choice bits