Sparky did his stuff, i followed Bobs run procedure to the letter and it fired up and runs lovely.
No knocks, leaks, rattles, misfire.. (yet)
However it cuts out after about 20s but the sparky reckons thats because its a flat battery.
Im leaving it trickle charge for a good few hours and ill see if i can get it to run for a bit longer.
I'm over f&#ing moon.

The sparky removed the alarm and this is what came out... 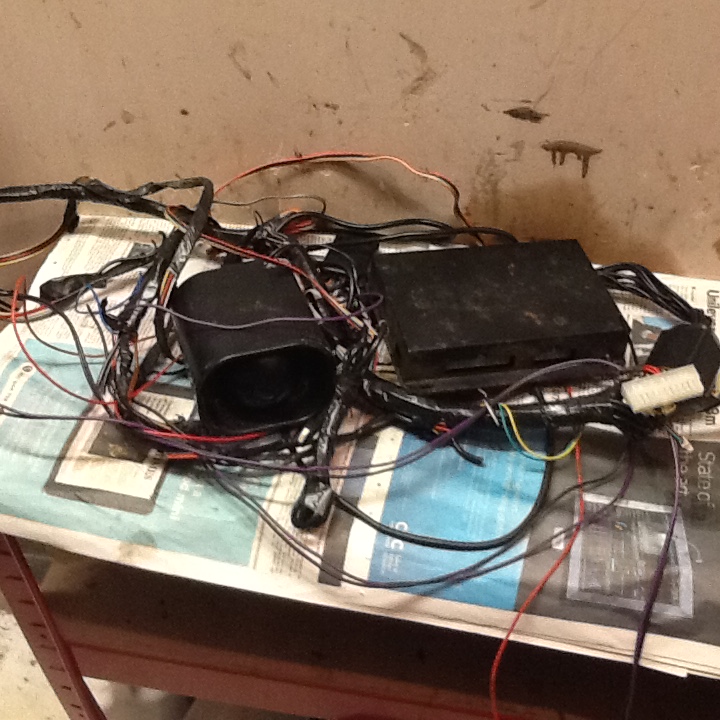 Posts : 1772
Join date : 2015-01-02
Age : 29
Location : on a sheep
Great news! And just in time for the show season. Amazing how much cabling there is in these alarm systems my cousins imobiliser went squiffy on a spring day (north weild when Bob run the event) and we spend an hour chopping it out with tiny scissors from my Mrs handbag lol bastard things

Posts : 1140
Join date : 2015-10-04
Age : 47
Location : Warwickshire
Yep, just in time for Japfest which gives me about 3 weeks to mot it.
Alarm wiring is a mess, glad its out. Its just more to go wrong in my book, especially with an ancient one like that Clifford.

Posts : 1140
Join date : 2015-10-04
Age : 47
Location : Warwickshire
This is very strange,
It starts straight away and purrs like a kitten for 10 seconds then stalls!
Its done this now for about 40 starts,
Longest ive had it running is about 30seconds by blipping the accelerator but it doesnt seem to catch.

Ive checked the following;
Fuel inlet is presserised, squirts fuel out and is connected to the inlet,
New fuel filter fitted,
Spark plugs are cleaned and gapped at 0.9mm,
Spark plugs were put in an oven at 140c and refitted,
Dizzy is in the middle position,
Dizzy contacts cleaned,
No sign of rotor arm unscrewing,
Timing is spot on,

I unclipped the afm and it made no difference,

Does seem a strange one, so if you give it a bit of throttle it still dies?

Posts : 1433
Join date : 2013-12-29
Age : 40
Location : Wigston/Leicester
Just out curiosity you did put your fuel lines right way around?? Return where fuel pressure reg is? I wouldn't say is overfueling cos it would idle up way too high... Oh and good job getting it back together

@Gostek wrote:Just out curiosity you did put your fuel lines right way around?? Return where fuel pressure reg is? I wouldn't say is overfueling cos it would idle up way too high... Oh and good job getting it back together

Fuel line is defintley the right way round,
Ill buy some easy start tomorrow and see if its a stale fuel issue,
If that doesnt work it can only be a sensor fault??

@Cosmic73 wrote:Yeah, battery's fine, loads of charge,
Plugs are dry so i dont think its flooding,

I think it's other way round its not getting fuel

Posts : 6682
Join date : 2012-03-12
Age : 34
Location : morpeth (Newcastle)
I think I argued this last time or people were saying not. How long has it been off the road ?
I know fuel goes stale but how many people actully can truly say it was 100% stale fuel only and how long has the car sat for this to happen

If its getting no fuel how it come it fires up and runs for 10seconds?
Bob supplied refurbed injectors so fuel should be pissing out right?

Also how do do dial up the fuel mix?

@burrows1980 wrote:Would it be anything like the cold start valve? Not plugged in, closing up too early? What rpm is it idling at before it dies?

I dont have a code reader,
idles strongly around 800rpm
Ill unplug the cold start valve tomorrow and see what difference that makes,
Cheers

@burrows1980 wrote:Would it be anything like the cold start valve? Not plugged in, closing up too early? What rpm is it idling at before it dies?

I dont have a code reader,

You dont need one. Just a piece of wire

my hunch is fuel pressures as when key turned it on (initial prime) then not coming on again so dies ! could link into wiring as fuel pump would deffo been in a cat1 alarm cut circuit.
You could easily wire a fused hardline to power the pump or monitor pump voltage/operation to try eliminate/prove it .
Plenty other things so keep open mind but rule that pump out & do fault code check as they easy areas to start with .
Least it didn't rattle or explode lol

Like others I believe it's a fuel related problem, now assuming there is still not an issue with the way alarm was removed I would guess there's either a pump issue as its been left a while and pumps can seize not giving full flow or the filter in tank has a residue on it which is not allowing fuel to be sucked up but soon as pump is turned off the residue disperses a little allowing it to run momentarily until it stifles again and engine will then eventually cut

So in short remove pump from tank and carefully inspect the filter to see if it looks like a wrinkled prune, if so temporarily remove it and just fit a pipe on it and try it. Whilst it's out give the pump a couple of clouts with a hammer as this will dislodge any matter that could be partially causing it to seize, my guess is this will resolve your issues
_________________
GTI-R-US.co.uk
In association with
Torque Of The South Motorsport

Posts : 1140
Join date : 2015-10-04
Age : 47
Location : Warwickshire
Fuel is definitely flowing in and out the correctly connected fuel rails, with very healthy pressure,
Fuel pump primes no problem,
Sparky said there was no immobiliser wiring to the fuel pump, it was left alone,
Checked cold start valve and it's connected,
Tonight i'll check the fuel pump filter as i think this all points to fuel starvation, (plugs are very dry).
I'll also re-gap to 0.7mm

Top drawer advice everyone thanks,