Was driving home and there was a plume of blue smoke coming from the exhaust AND from every breather on the engine, when revved. I managed to get it home but it was running on three cylinders and was leaving a smoke screen 007 would have been proud of!
Nice little puddle of oil had been ejected from the back left cylinder head breather too.
Catastrophic methinks

Anyway, I can't afford to rebuild the engine or swap something else into it so, it has to go as-is. My mini has eaten almost all of my funds lately.

I'll get some pictures up when I get a chance but won't be until the weekend (ie when its light!).

I have a few spares for it in a box that would go with the car. Includes old ignition amplifiers, coil standard airbox etc. Also have the original gearbox that needs the bearings replaced as a spare.

FUBAR engine. Does run and drive but probably not for much longer.

Tailgate ideally needs replaced. The previous owner replaced the lock cylinder with one from a different car and buggered the mounting hole for it. I replace the whole lock set and managed to get a proper R lock to fit but, it isn't pretty.

Again, said (asshole) previous owner removed the wind deflectors from the doors with what appeared to be a screwdriver, damaging the paint. I touched this up when I first got the car three years ago. There's no rust, just needs rubbing down and spraying properly.

The car is almost thirty years young and on its original paint. Its a little picky here and there BUT still looks very good when polished up. The only welding its ever had was at the rear of the passenger side rear arch, kinda below the fuel filler cap. There was a 2" section cut out and replaced and the whole quarter sprayed over. You'd never know it had been done! The mechanic who did the clutch job for me said it was REALLY clean underneath, in fact better than his '08 plate Impreza track car.

Looking for £4750ovno
(unless everyone thinks that's ridiculous) 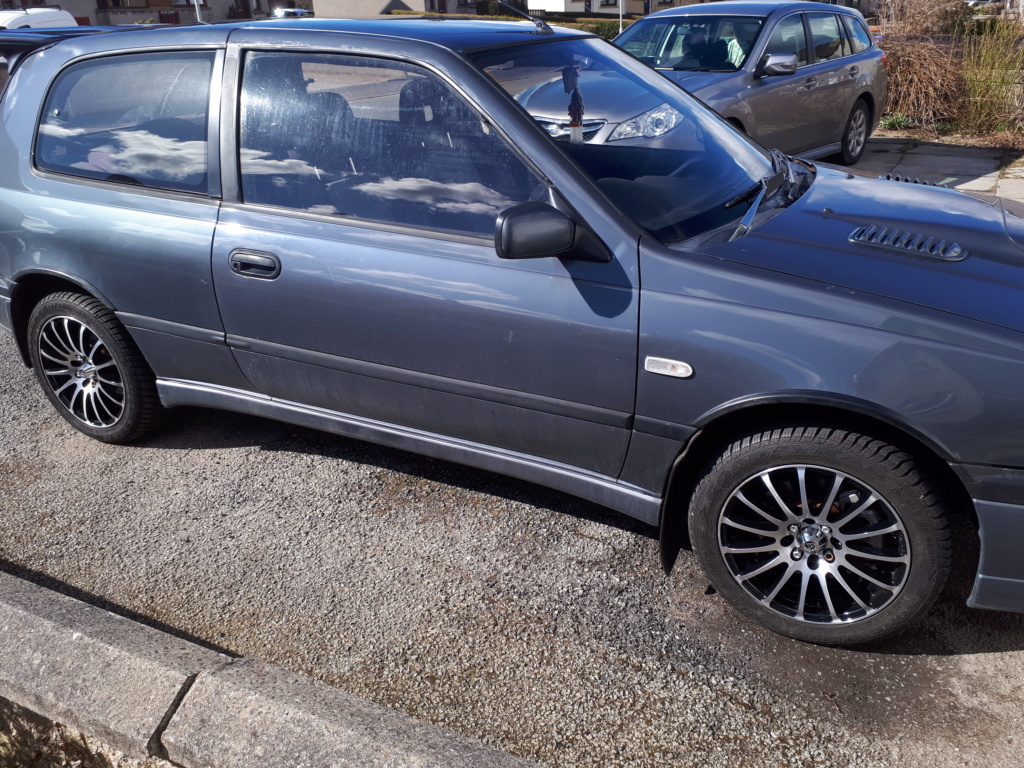 set of pistons and bore hone likely sort that along with proper fuelling ignition check as I would suspect you had fuel ratio issue that brought it on .
I would leak down test and bore scope it before contemplating sale .
It sell far easier and worth lot more with non FUBAR engine lol .
If didn't need bore oversize it cheap pretty quick repair with good used oem parts .
new piston set and rebore more work and part cost but it not stupid money if can do the main labour work yourself and just send out to a decent machine shop .
Be sad see another active member go .

This was my daily drive to work and I need something fairly reliable that doesn't need constant love & tinkering to keep moving. I've got a classic mini (H reg too!) that should be the one that needs constant attention, not my daily.

I've actually been driving around in the mini over the past few weeks and thoroughly enjoyed every minute of it. Its made me remember that straight line speed isn't the fun part, not having to brake for corners is. Well, that and the straight cut gearbox!!

This got me thinking that maybe I should downsize my main car to something more agile, frugal and reliable. I only do around 6k miles per year, 95% of that is going back n forth to work along twisty back roads.

The R is great on the dual carriageway but in reality handles like crap compared to other cars.
This engine failure is really just forcing me to do something about it sooner rather than later.

I could investigate further this weekend so at least I know whats wrong with it but that’s going to be it. In my mind to get it sorted properly is either going to be a full engine rebuild or, swap the engine. Neither of which I can do myself TBH.

Posts : 754
Join date : 2013-09-24
Age : 45
Location : Aberdeen
I've ordered up a borescope to fit onto my phone so I can at the very least have a look inside to see what the damage is. Might make it easier to sell if its just a piston that's gone although i'm not holding out much hope...

Posts : 306
Join date : 2015-03-16
Sorry to hear about your bad luck! I hope it's nothing too serious and you decide to keep the car after all! I hear you though about the old classics! Deffo sure to put a smile on yours and everyone else's face!

The car was eventually sold on Sunday morning after a bit of faffing around.
Buyer was meant to arrive 10am Saturday morning, which was then quickly changed to 2pm. At 4 I messaged to ask if they were still coming and the reply was "yes, we're on our way". With an answer like that I expected them to arrive in an hour or so but nope. 7.45pm I messaged again to say that the first bidder on the car had been in  touch and was willing to buy the car if this sale had fallen through. I got a message back saying they were still on the way BUT were 170 miles away

Some quick man maths later meant they'd be arriving around 11.30!
11.45PM they arrived and after some negotiation (and threats of divorce from their partners) the car was sold. They finally left mine at 1.15am on sunday morning, driving back down to Manchester! Apparently the car's going to get a forged engine and a respray next year and will be residing in his personal collection of motors!

To say the car was extremely rough would have been an understatement. It was running on three cylinders (badly) and smoking its tits off. I think just getting it loaded onto the truck woke everyone within a half mile radius!
Have a look at the clip below and it will reveal all, requires sound! Oh, this was the second attempt at getting it loaded. The first time it got half way up the ramp, stalled and rolled back down. Took about 10 seconds to get it going again!!

Posts : 4765
Join date : 2014-07-22
Location : Australia
Sounds like a bit of a muck around for you mate. It didnt take long to sell which was good. Hopefully you got close to your asking price

Re: R for sale