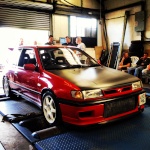 very rare! also note there location! i was told they were on it when it was imported, looks like they really were

I'm glad to see the car has found a good home, looks like a well spec'd R for the price. Hopefully I will have my R in a few weeks, I will need to makes shure I keep my finances in order though lol I know these old cars can be abit of a money pit and there's so many things im going to want to do to my R when i finally get her, it's going to be a slow process of spending little bits hear and there to get mine exactly how I want it.

I have recently been doing some work on the Pulsar.

First off, I didnt like the fact that the Rad-Tech radiator did not have a bracket on the top to stop it from rubbing on the back of the intercooler. Apparently this is a common problem with the Mark 1 series of this kit. I had Retropower in Hinckley weld me a bracked onto it, and I also had a new nipple for the expanson tank welded on, as the original one had been snapped off, and the car was ran without an expansion tank fitted!?. I am really pleased with the outcome! 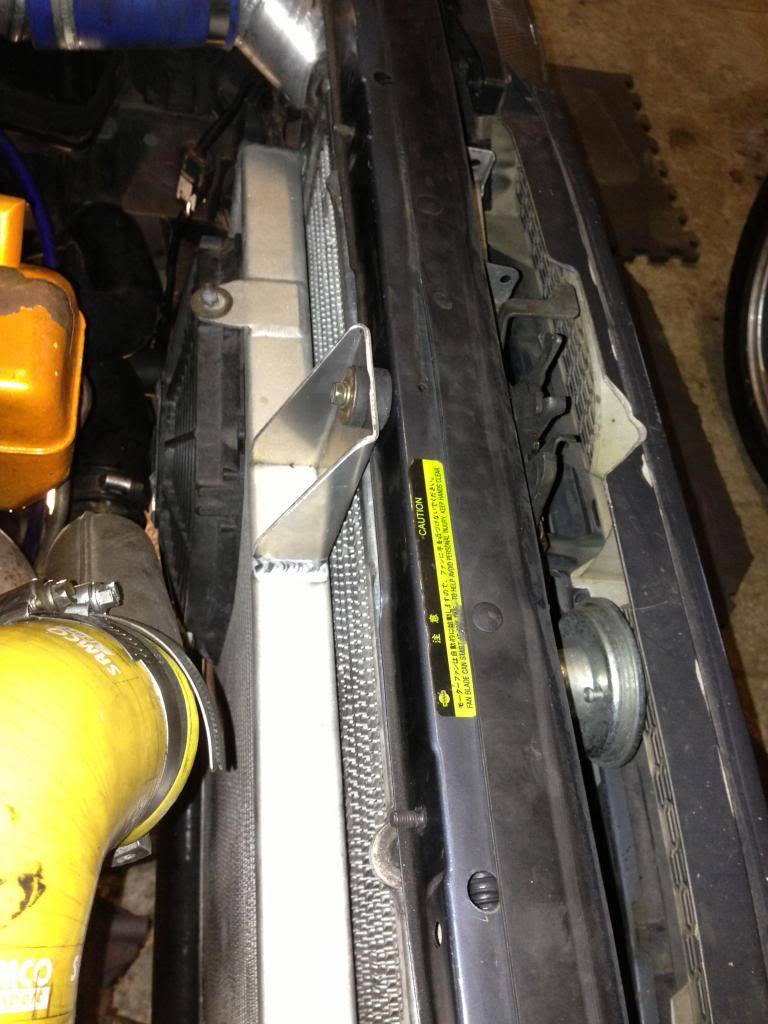 Whilst out for a drive a couple of weeks ago, I ended up pulling into a farmers field after the alternator seemed to pack up, and the old girl died. This was later confirmed when we got it back to the unit, and we tested the alternator. This seemed a bit suspect to me, as I have only just bought the car, and a couple of weeks before purchase, there is a receipt for a new battery for the car. Anyway, I have fitted a spare alternator today, and bloody hell does the car move now :-)! Before the alternator fault was found, I did notice that the car was somewhat laggy at times, and became a more common fault recently. I took the car out today, and it ran as sweet as a nut!

The next thing that has been changed is the stupid orange rocker cover and oil seperator tank. This was on the top of the list to get done, as I really did not like it at all! When I removed the rocker cover, I came across clear silicone sealant that had been used as a gasket!! I was not happy at all about this, and so cleaned it all off and had a good look around the cams etc to try and make sure that there wasnt any in there after removal. To top this off, the pipe from the bottom of the oil seperator was not connected correctly, and oil was everywhere. I have now resprayed the tank, and put new hoses on it. 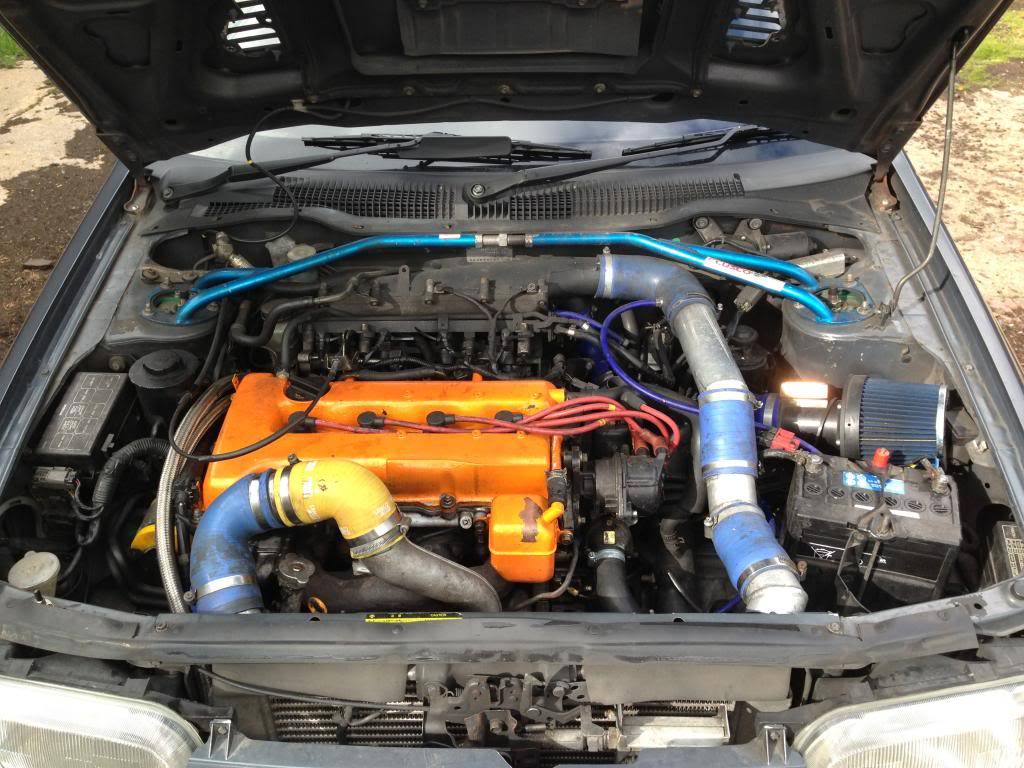 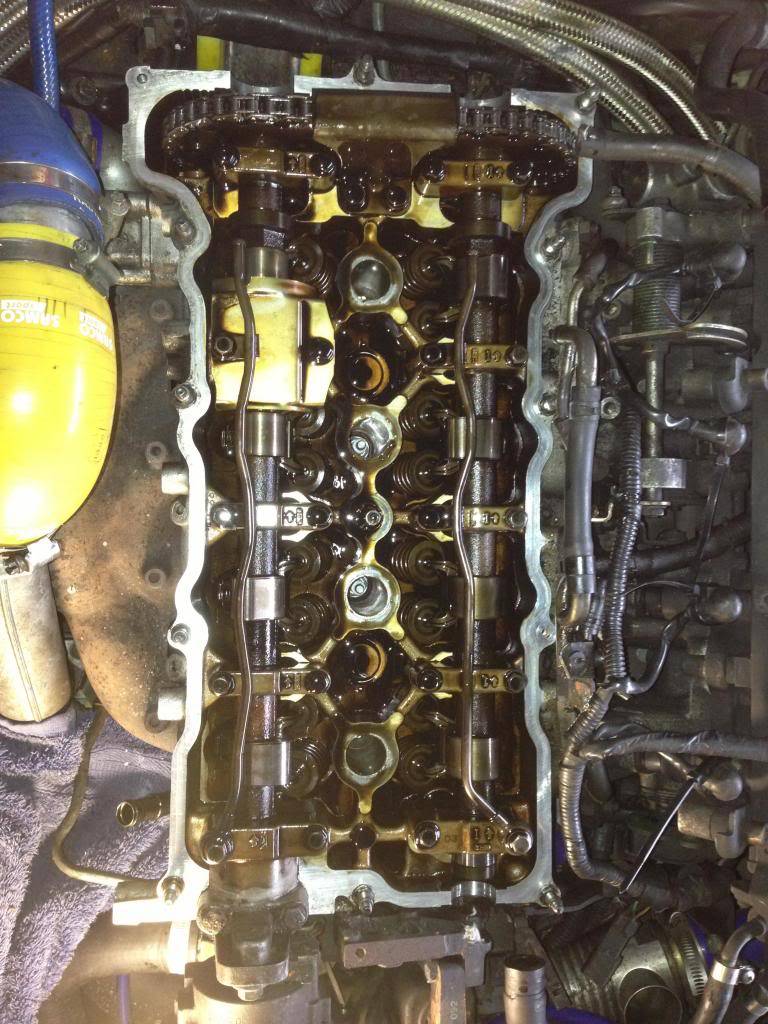 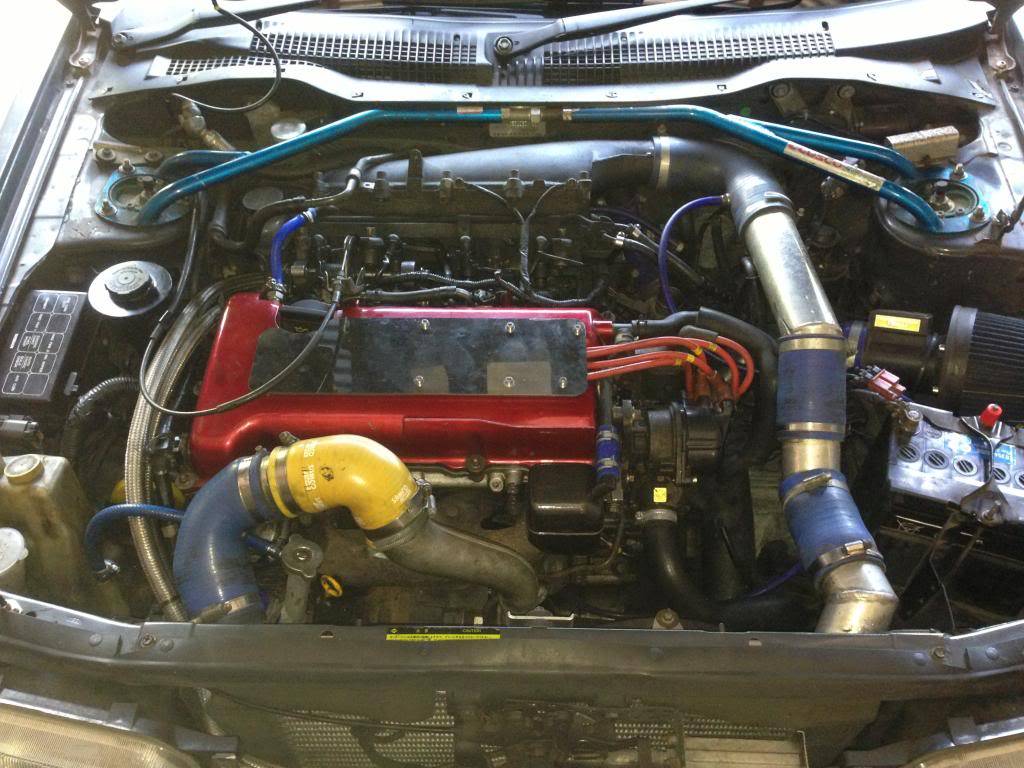 After this was complete, I noticed that the strut brace had been tightened down onto the silver metal box in the top right of the photo, which had bent the base of the frame quite badly! I dont understand how someone would miss this, and just tighten it down and not realise that its not sitting correctly? Anyway, I have now corrected this, and thankfully it seems to be ok.

The rear seats that had been put in were not correctly installed, and the brackets that the upper parts of the seats slot into were not installed. I have since put all of the brackets in.

Next jobs are to remove the intercooler pipework, and get some new pipe fabricated up, and get rid of that ugly orange silicone hose. Get a new rear bumper off bob, and give the old girl a full service. I will also be getting the alloys refurbed, as they have been painted with a paintbrush by the looks of it!

All in all though, I am really enjoying the car now, as I have spent a few hours just generally getting to know how it drives, and tidying it up. Im looking forward to the rolling road day, and meeting up with whoever is going.

A few pics recently, just after I cleaned it: 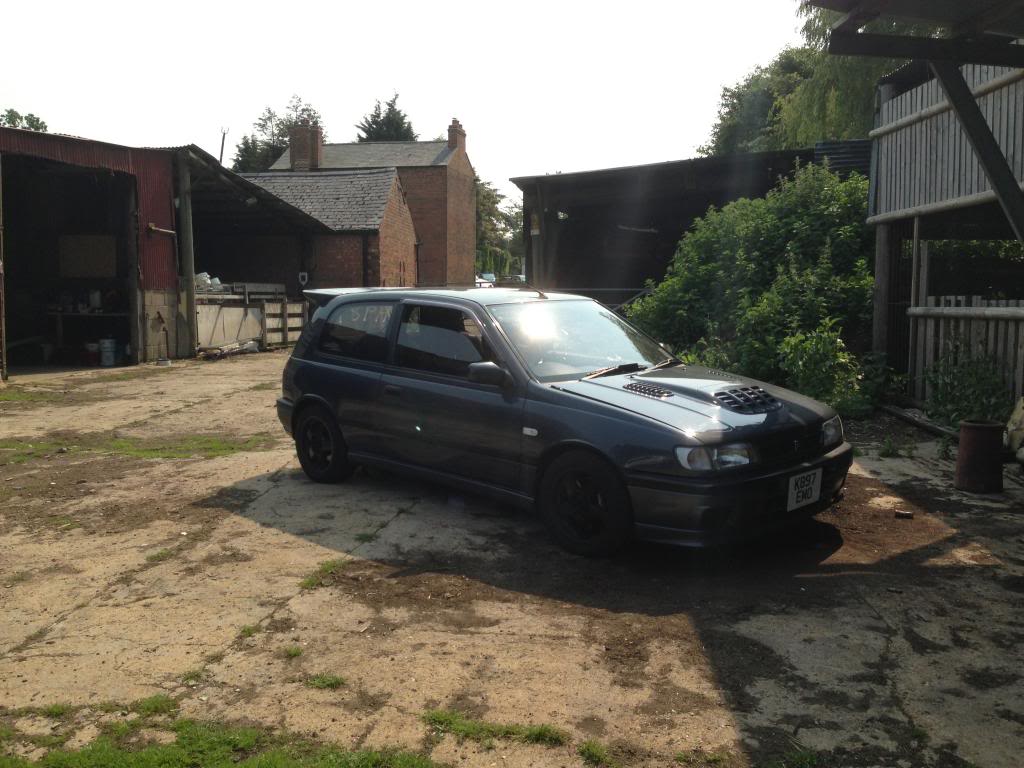 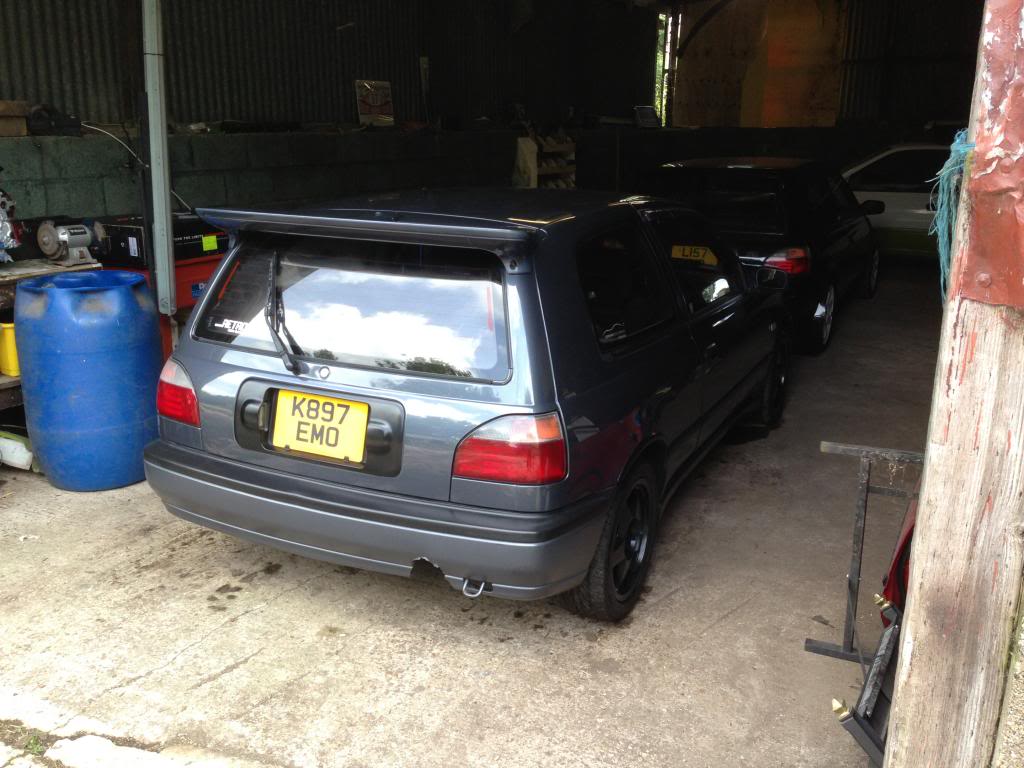 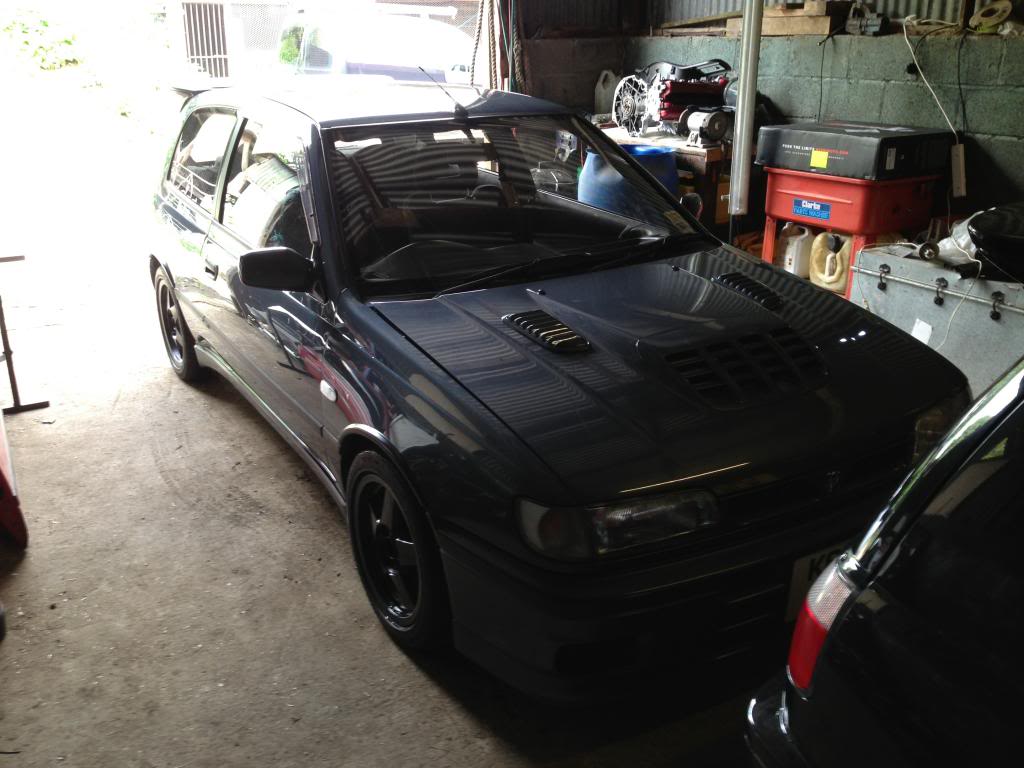 Posts : 2471
Join date : 2012-09-25
Age : 42
Must be somthing in the air .. Mines grey and my alt failed about 6 weeks ago ..
Also noticed your side vents are black just like mine .
Are all grey R's like this? Was it an option from factory? Or just changed by previous owner .
Mine came from japan with black vents

Posts : 107
Join date : 2012-03-10
Age : 35
Location : Rugby
Nomad - Yes, i have done other bits too, the list just goes on LOL! But thats part of the fun to me. I have to admit, it really does annoy me though when you find stupid basic things that are done incorrectly. Im no mechanic, but its obvious you don't put silicone sealant as a gasket for a rocker cover!? I have since discovered a snapped bolt on the turbo elbow, so this is blowing. this will be getting sorted asap, and one of the bolts on an engine mount has been forced in, and only gone in half way

. I will get some pics to show you what I mean.

GTIR_R_LOW - Do you mean the bonnet side vents? If so it must be the pictures as mine are grey lol. What symptoms did you get when your alternator packed up?

ABS light came on and Mine started to missfire when i was driving and then when i looked at the power fc display it showed the batttery voltage as 8.8 volts , Managed to make it to a car park and she cut out

Posts : 8336
Join date : 2012-03-04
Age : 105
Location : DONT KNOW ANY CLUES???
looking good matt, you've been working hard fella
tell the ginga russ to give me a bell because if he still wants that rb box and spares for it then il be removing it soon as fitting my new dogbox, hes not insulted me for a while now and im getting withdrawal symptoms lol

Posts : 213
Join date : 2013-03-10
Age : 30
Location : southend, essex
hi, aint been on here in a while! just so you know i didnt do any of the dodgy stuff on the car! all i did was fix it! the bolt on the engine mount i did see that but left it alone because the 2 bolts either side were in fine so i saw that causing no issue.

(i admit i did not fully fit the rear seats though as i lost the bracket and bob gave me another and i dont think i ever did get round to putting it on!)

to be honest i only came on here because i want it back.... lol, loved this car, let me know if you sell it

and the alternator was working fine when i had it, i drove to halfords, when i came out i had a flat battery, so i had a battery and alternator test done, they priced up a battery (too expensive) so i got one from euro's

Posts : 4054
Join date : 2012-05-05
Location : B's workshop thailand
Nice improvements & when intercooling pipes done proper it will look a complete proper job.
Can't believe radtec went through initial development without thinking it needed a bracket :-O
One of the big problems with used UK GTiRs is all the small rectification jobs you may find from previous bad DIY tinkering, sometimes it can be a cock to put right but seems most your fixes been reasonably easy so far.
Nice to see a job done right rather than the lazy way so best of luck with her ...

Re: My Grey Gti-R