Posts : 135
Join date : 2012-03-07
Location : Derbyshire
I've had mine about 12 years now.It started off as a standard low mileage car and blew me away at how fats it was compared to the Ren 19 16v I part exed it for.It made 230bhp/200lbft on Well lane's rollers.
Before long it had a Jetex filter on it that was a bit shit as a local place made up a crappy MAF adapter.Next on was a mongoose and it made 240bhp/220lbft(IIRC) on standard boost at the same rollers.It did the 1/4 mile in 13.6s @ 99mph
I joined the 200+ club and started going to York raceway.It was here I could really notice the heatsoak it suffered when stationary, so messed about with a home made switch operated water spray.It worked well but tended to fill the sparkplug holes with water so had to go.I also tried directing cold air under the tmic from the grill but can't say how much use that was.
I knew to overcome the heatsoak I'd have to spend some wonga and afaik I was the 1st to buy Forge's newly developed fmic kit.It cost £850 at the time, although I got 10% off.You autobahn buyers don't know you're born!After fitting I booked it into a well known garage to have the whiteline handling kit fitted and to have it mapped on a unichip.Long story short, the suspension wasfitted and loved it, but they couldn't map the car for some reason so the car came home unmapped but with boost set at just over 1 bar and what a difference that made.Another trip to well lane RR with the 200+ club saw a claimed 333bhp/290lbft but I think 280-290bhp was more likely as it ran 12.7s @107mph at York.
Then disatser struck around 8-9 years ago when the gearbox got stuck in 5th gear after a spirited drive and I ordered a PAR gearset.It took forever for them to make it, around 9 months and when it was built up(badly) I drove down to santa pod and the car detted, wrecking 2 pistons and 3 valves.Started getting bits together for the build:

Had aquamist WI and MSD amp and coil fitted by local tuner.Had it mapped by Ed at 315bhp/300lbft at 1.15bar but wasn't really happy with it.So had the mongoose replaced for a full 3" system and a gt3071 slapped on.Pulled much better from the off without even being mapped.Whilst there I met Danny and dropped my gearbox off with him to do his magic.Got it back from him and it actually works now.
Took it back to Ed's and it made 394bhp/350lbft at 1.45 bar.Mapping stopped by a misfire.Pulled like a train at the topend but boost coming in too late for my liking.Did a lot of reading about and came to the conclusion that it's the cam timing.
So, this last weekend I had my STR motorsport gearbox brace fitted and the rear diff swapped(mine was a bit clunky), picked it up this morning and took it straight to a local tuner who is dialling the cams in, fitting a Bosch 044 and swirl pot and a new fuel relay.He's also remapping it all going well and should get it back next week sometime.I've asked for faster spool and another 50bhp or so and more torque.Will see what happens.

I've probably mised bits out so will add if I remember. 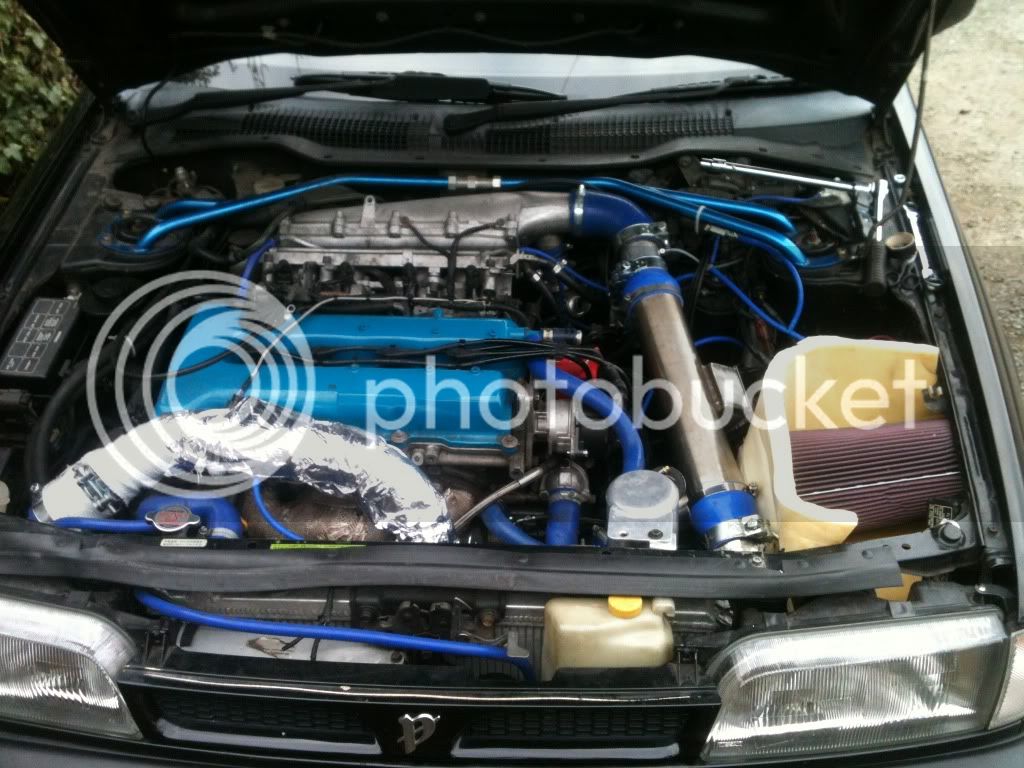 I found the Teins too hard for the roads around here so went back to a Koni setup and had the suspension set up again.Better but still too low really.The interior is mostly stripped too.

look tidy when the cars clean

About a month ago I was messing about with different induction setups after I decided to go blowthrough on the Z32 maf.To cut a long story short, it didn't work very well until I bought Danny's custom made one comprising of a long 3" tube and a welded on boss for the maf.After that it was fine.As this changes the amount of monitored air going into the engine(it's measuring airflow after all the little leaks), I knew it needed another remap so decided to pull my finger out and get the cams, extra pump etc all done at the same time.


May as well list the chassis mods while I remember.

Now has massive K&N filter on 3" piperun to turbo.Boxed in by the foam you see in the picture and fed cold air via a collector I made under the bonnet scoop.

Exhaust manifold and downpipe are lagged to keep the heat in and the turbo outlet also has exhaust lagging on it with a foil blanket over the top to keep heat out of that.I took a pressure source just after the outlet to get a more accurate reading for the boost solenoid.

12 years with the same car is dedication!

Posts : 135
Join date : 2012-03-07
Location : Derbyshire
Medication more like.I had it off the road for a fair few years stored in the garage.I think that's the main reason it's not rusted away like so many.That and I got out the waxoyl when I 1st bought it.

Re: The old shitter