I know, but I did go and look at it before I bid.
it was running but the turbo was completely shagged and there was a very noticeable tapping noise coming from the valve train.
the usual rust around the rear arches and had loads of shite stickers around the engine bay.

anyway not perturbed by what was on the first sight a bit of a shitter, the add stated it had hks pistons, forge expansion tank, re-ground crank, acl bearings front and rear gab strut braces, spax springs, scorpion exhaust and a turbo timer. other than that she was pretty standard. the lad that had it had just rebuilt the engine but had run out of money and flung the rest back together to sell it, which was noticeable on further inspection. Anyway I managed to acquire it for under £800 and in hindsight I should have looked a bit further afield as I'm sure I could have got a much better example.

Once I got it home the interior was all removed and the obligatory screwdriver test was carried out on the floor, only to find that there were holes in both rear seat passenger footwells and drivers footwell. all of which were cut out and welded back up.

with the interior back in I focused on the engine and the tapping from the valve train. with the rocker cover off i noticed that one of the shims was completely missing allowing the rocker to slap against the top of the valve stem, quick call to bob and a new shim was purchased for £7. During fitment I also noticed that the cam caps had also been fitted incorrectly so that there was no oil feed to the cams. so both cams were removed and checked over for wear as well as all the rockers. luckily the engine had not been run that much due to noisey tappets and turbo so all was fine with valve train. Once restarted engine ran fine with no unusual noises.

next on the list was the turbo which was replaced with a new genuine Garrett which cost nearly as much as the car.

after that a full service with all the oils changed and the brake pads, discs, front ball joints and got rid of the awful OZ titan alloys for a set of standard rims, she was ready for her first MOT in 3 years. which it passed with no advisory's, winner! 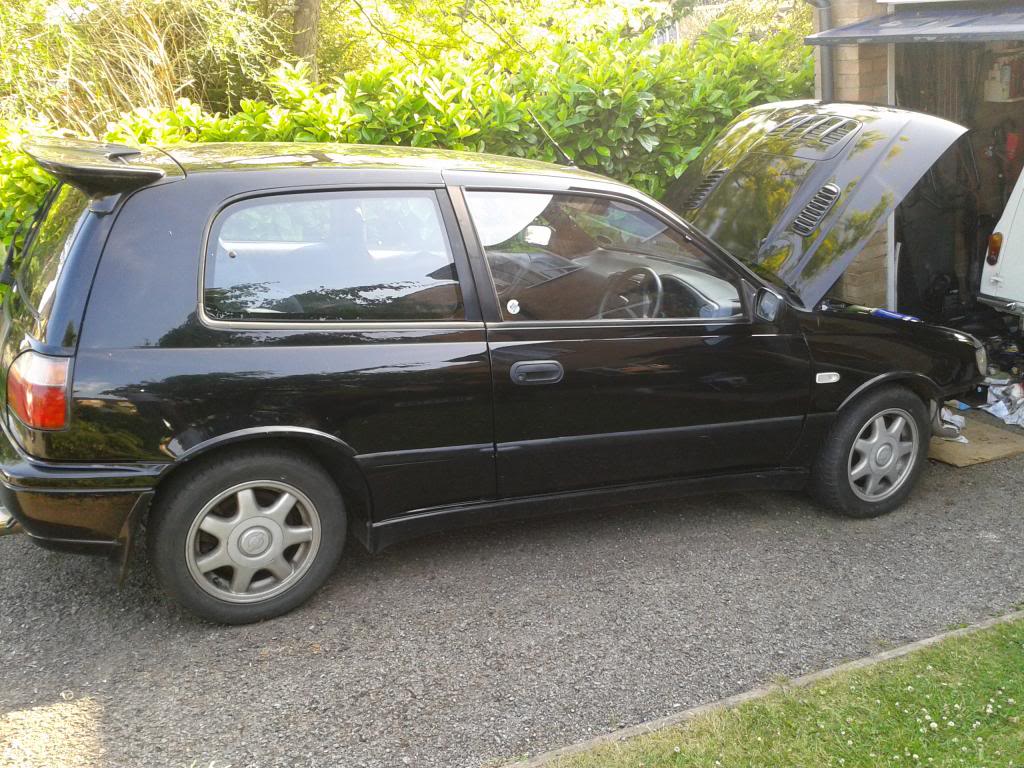 As the engine had been newly rebuilt I started the 1000 mile agony of running in with regular oil changes. but since the car got used only on weekends that took nearly 6 months to the point I ended up driving it to work and back just to get it done (400 mile round trip!)

then disaster, after a quick run about the local countryside I came back into my local town and noticed some blue smoke on the overrun

after having it checked over it transpired my boost control solonoid was tits up and the car had been running unlimited boost (no wonder it was quick) and turbo now gone in only 1600 miles, pissed off was an understatement and I was ready to sell up. But after reading a few posts that seemed to be what everyone does when they have little experiance of the pulsar rather than fix it, I didn't want to be one of those people who would slate them as it was my dream car when I was 20 so I saved up and started spending.

First came a set of tein superstreet coilovers (I know i had a blown turbo but they were a bargain)
then a couple of phone calls to bob and him relieving me of the cash burning a hole in my pocket came a gt2860rs turbo, z32 maf, nistune with 4 switchable maps and a whitline rear anti roll bar. Then came a set of JUN 264 cams and hks pulleys, greddy rocker stoppers, front mount intercooler and apexi avcr 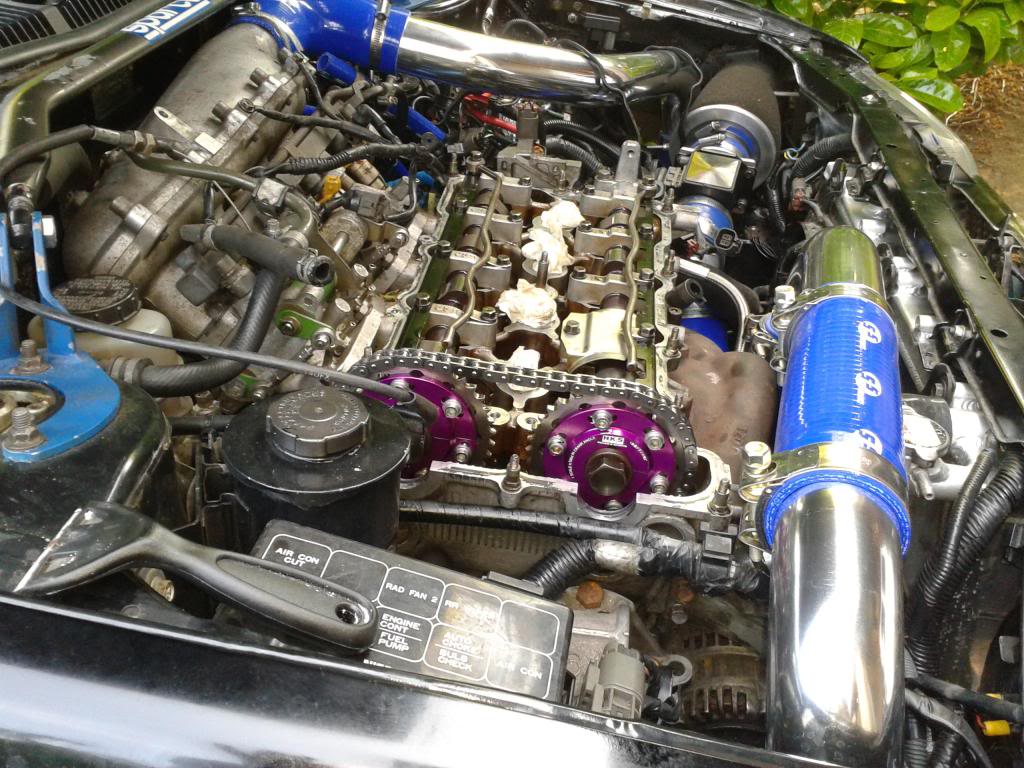 once that little lot was fitted the car was once again alive and due another MOT which she passed again fine.

whilst driving i always felt the brakes were shit even with new discs and pads she was still a bit hairy when coming up to anything unexpected so i looked out for a brake upgrade but like everything i'm a bit of a tight wad and like my bargains, so when a set of wilwoods came up in the local rag I snapped them up for £150 renewed all the seals and a couple of pistons and with new discs and pads fitted them up 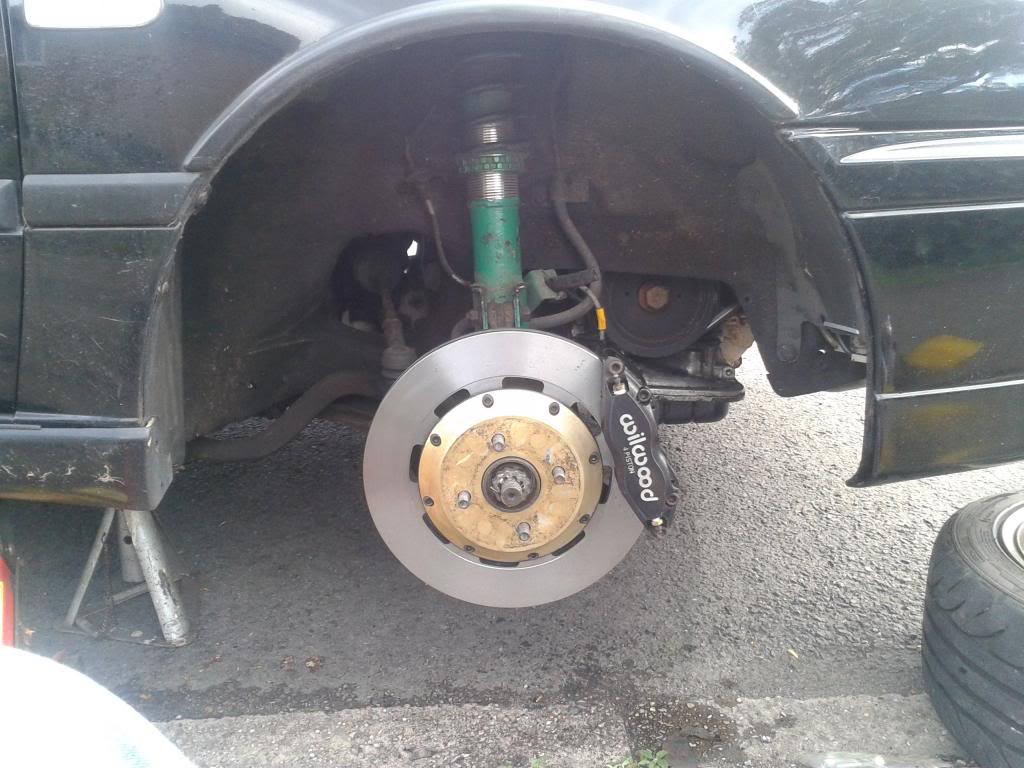 the differance was instantly noticeable and confidence was back in the car.

I spent the rest of the year driving about and enjoying the car but still had been worrying about rust as my local mechanic said that although she was fine for the mot she was getting a bit crusty around the back end. so in march this year I took her off the road and proceeded in stripping down the backend in order to clean her up and rust protect for the future.

few pics of the strip before cleaning:- 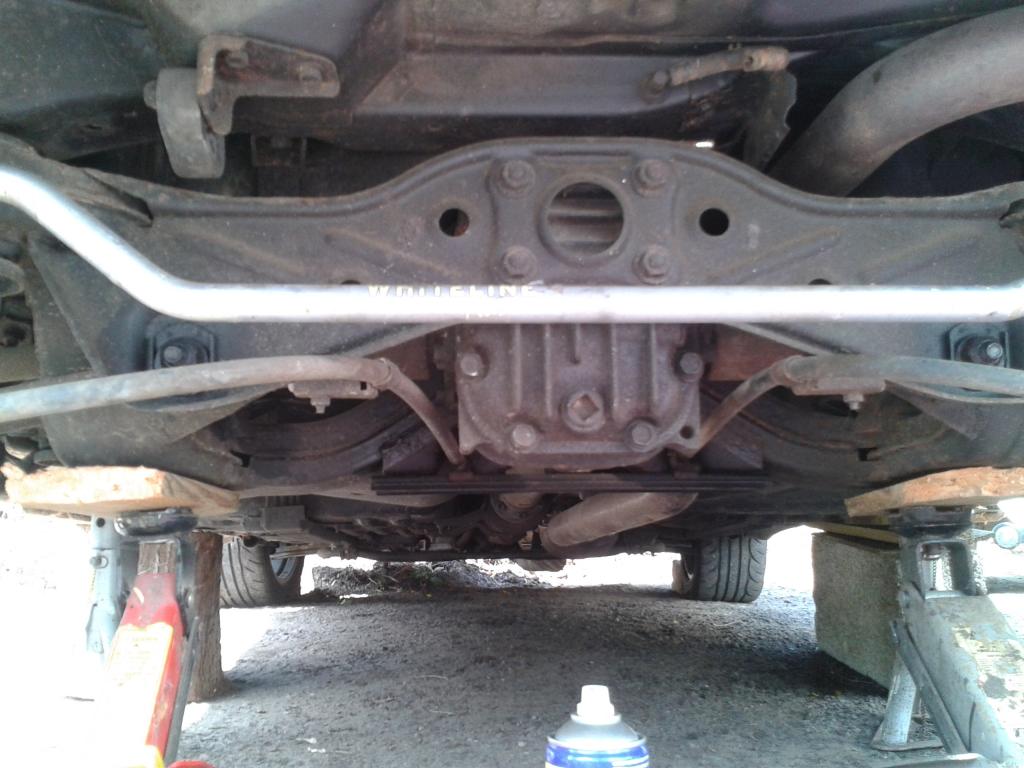 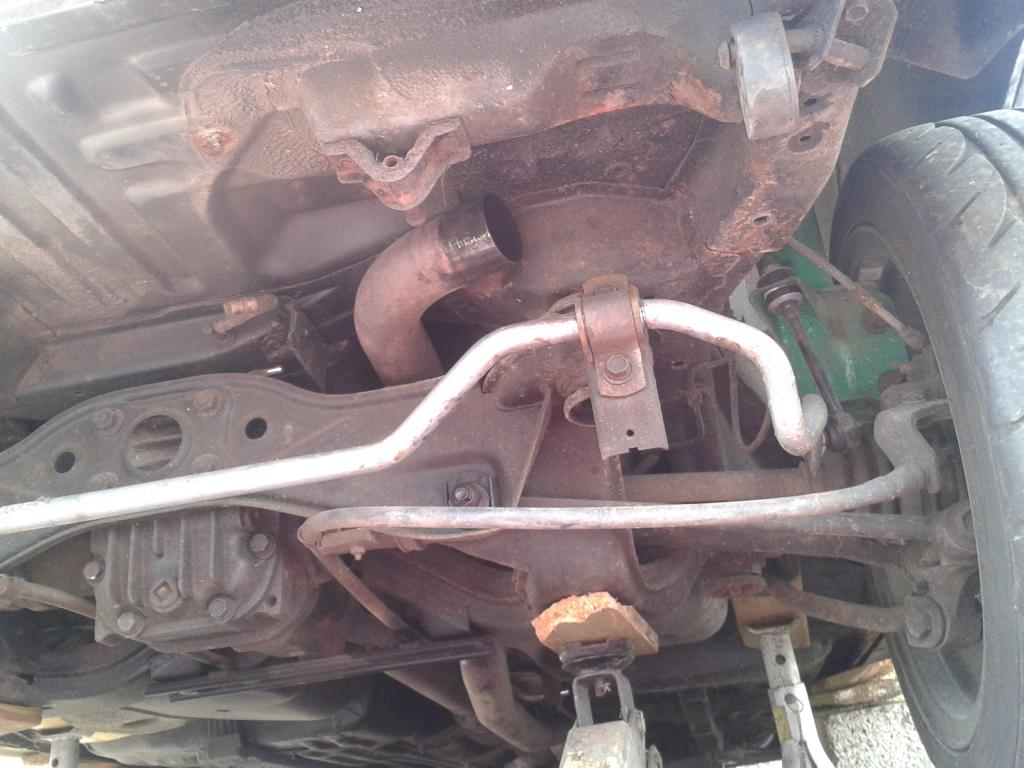 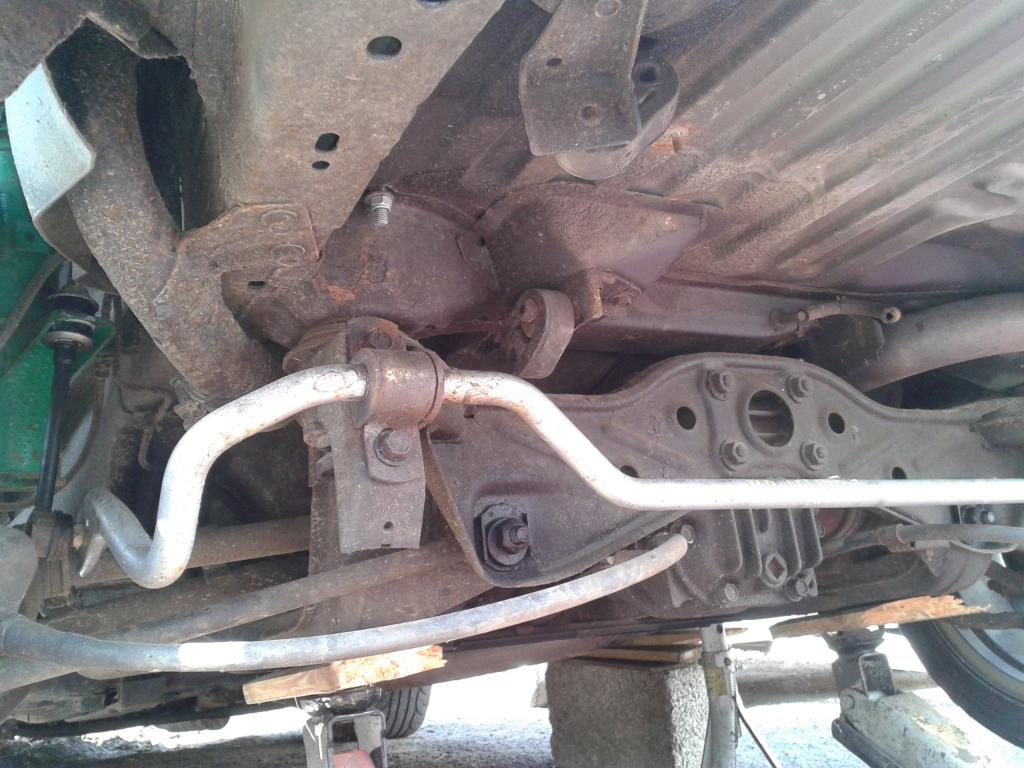 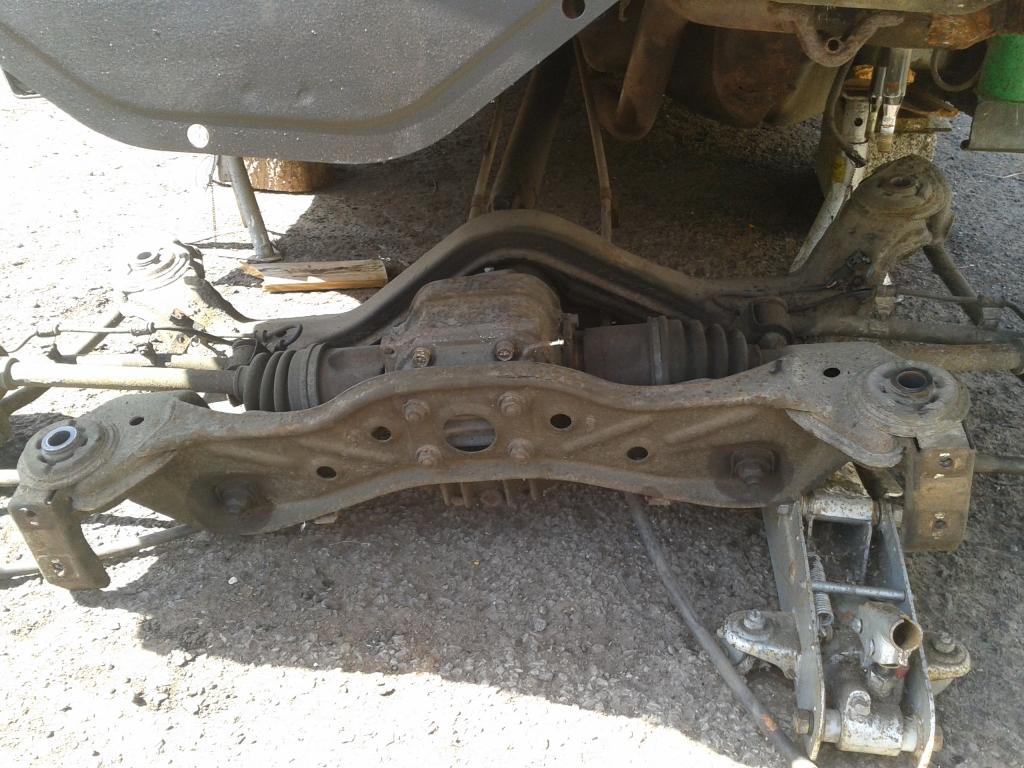 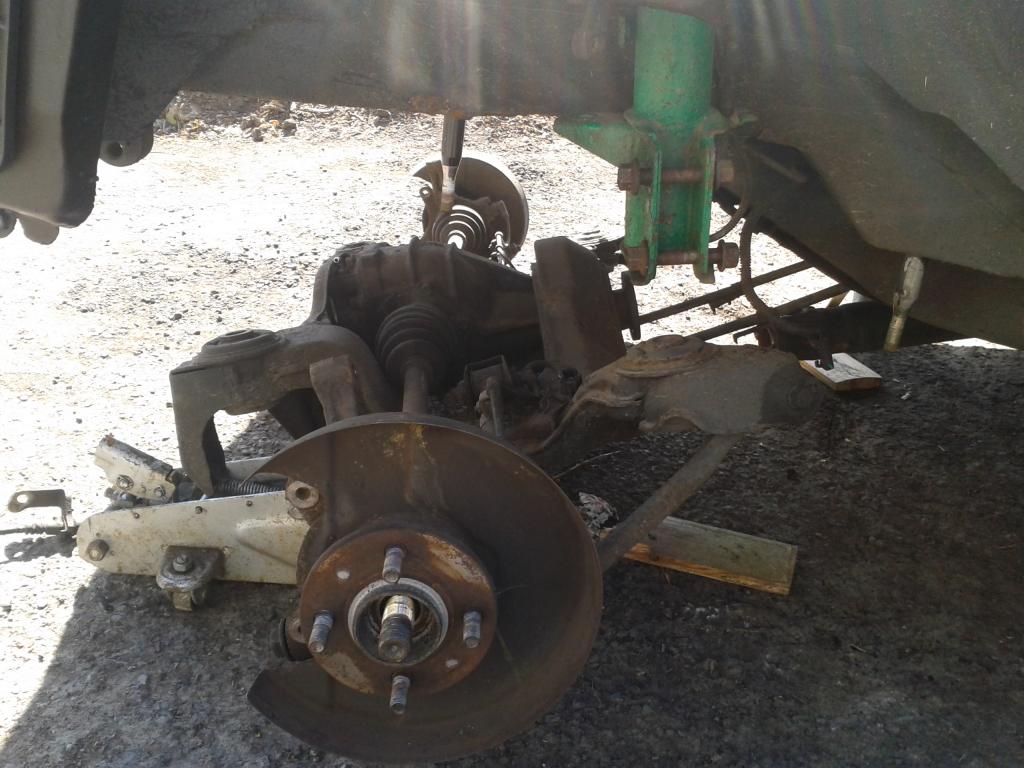 after getting the wire brush out i found a few holes in the usual places so they all got chopped and welded up and all parts were powder coated with all new bushes fitted:- 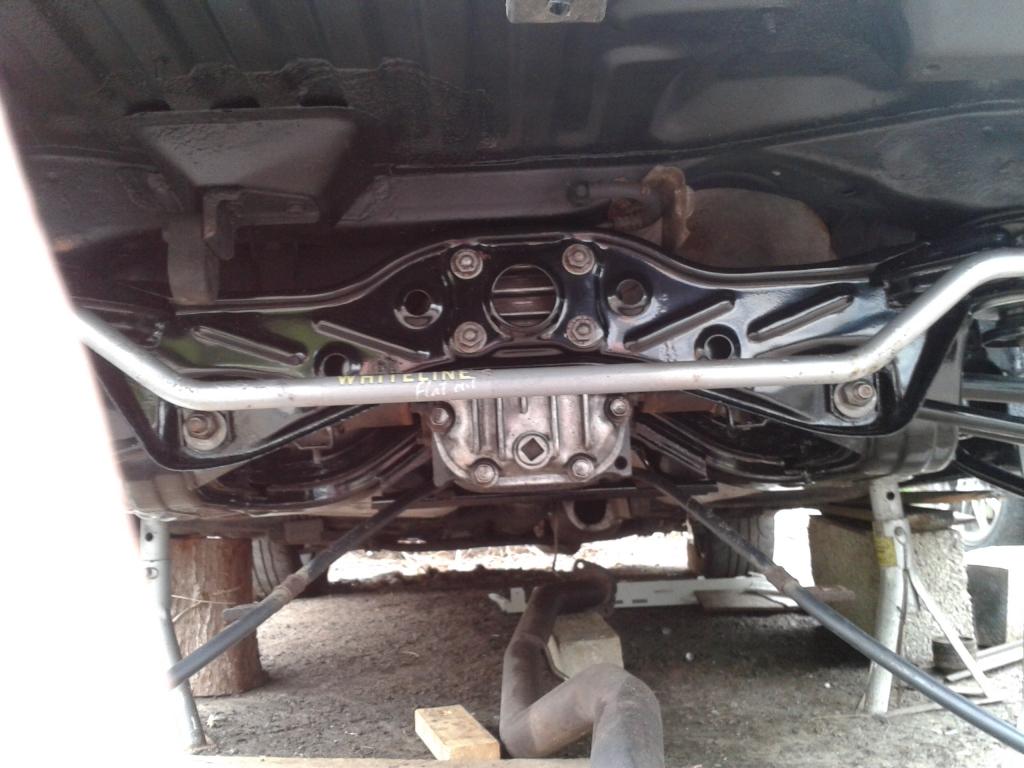 you can just see where I removed the rust and welded, the point were the subframe attaches to the chassis. 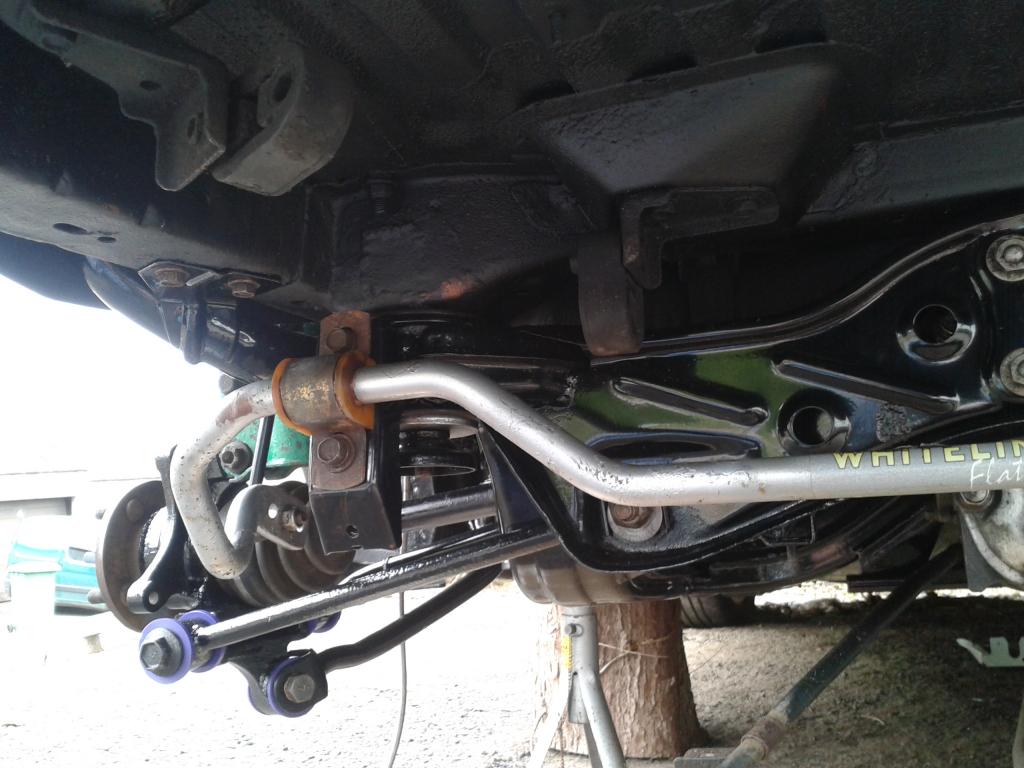 cleaned up arches and hubs and fitted new brake lines as they fell apart when subframe was removed. 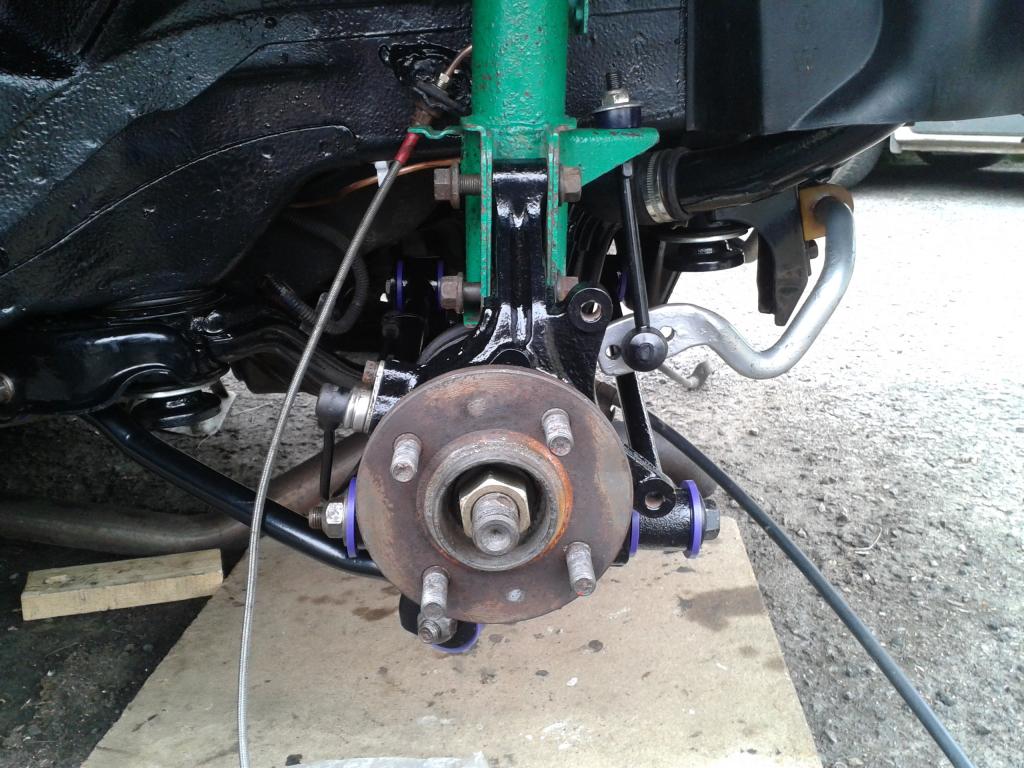 also fitted new brakes on the rear too:- 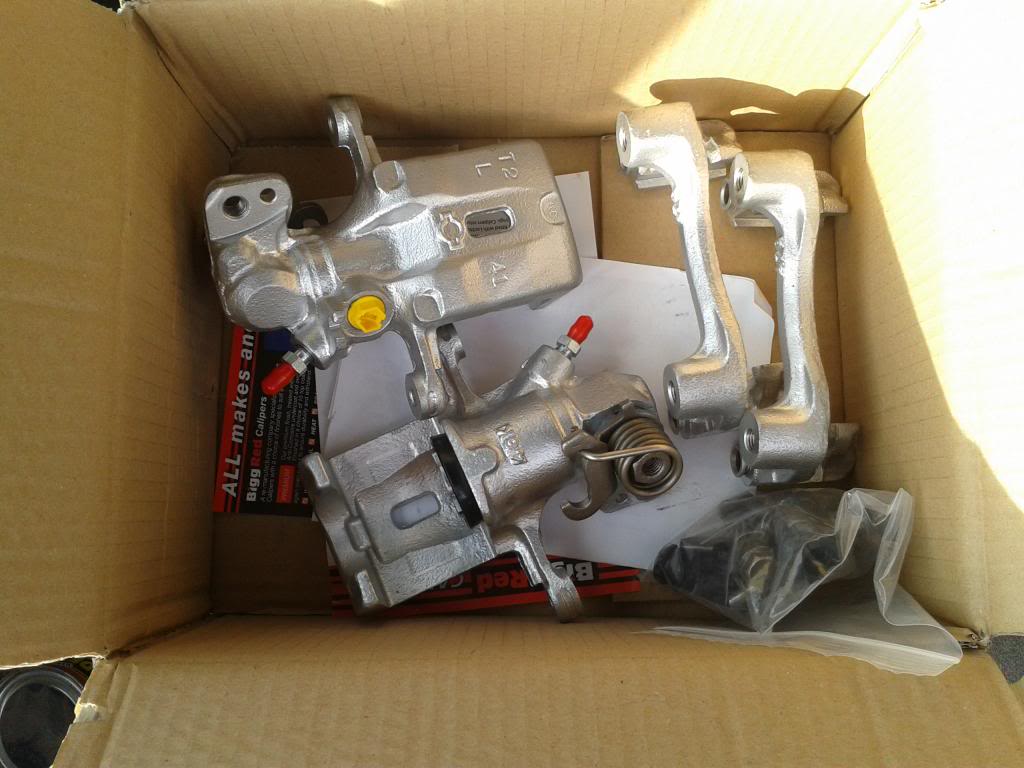 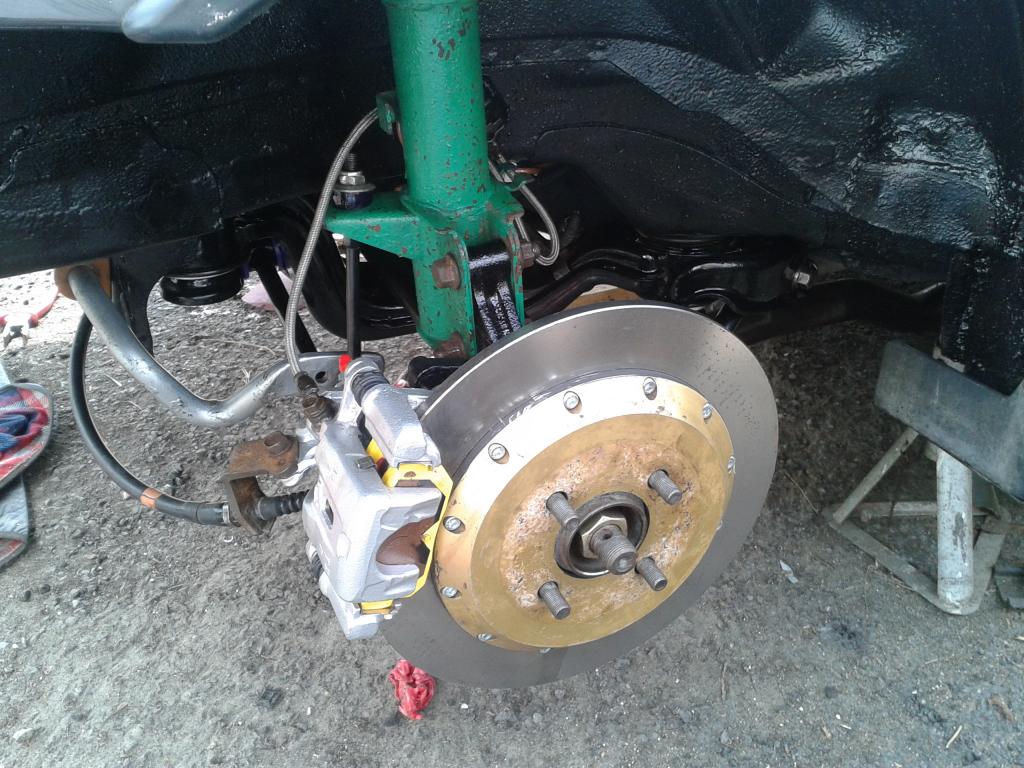 anyway that about it to date sure there's some stuff I missed but here's the current spec and what she looks like to date. Paul 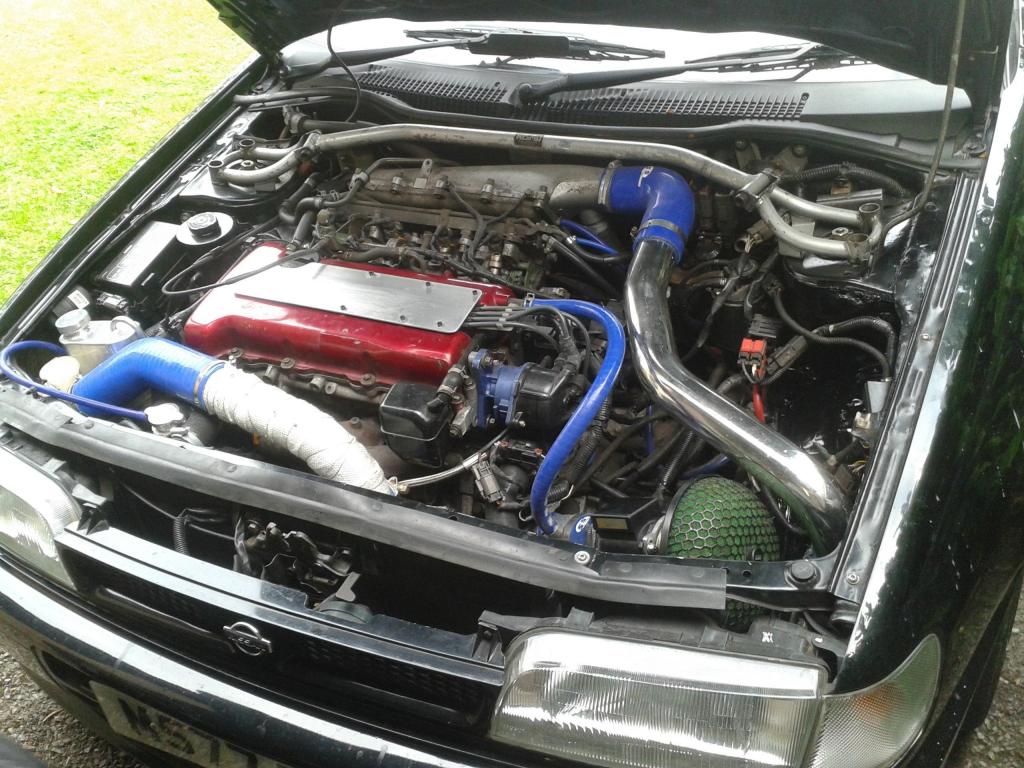 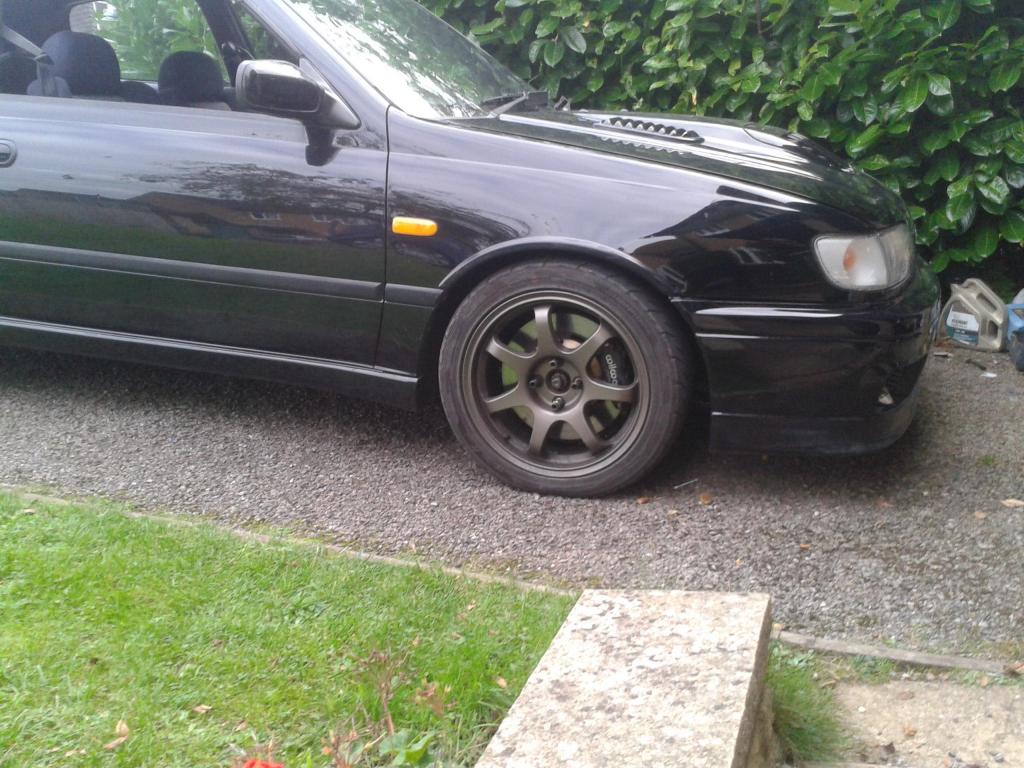 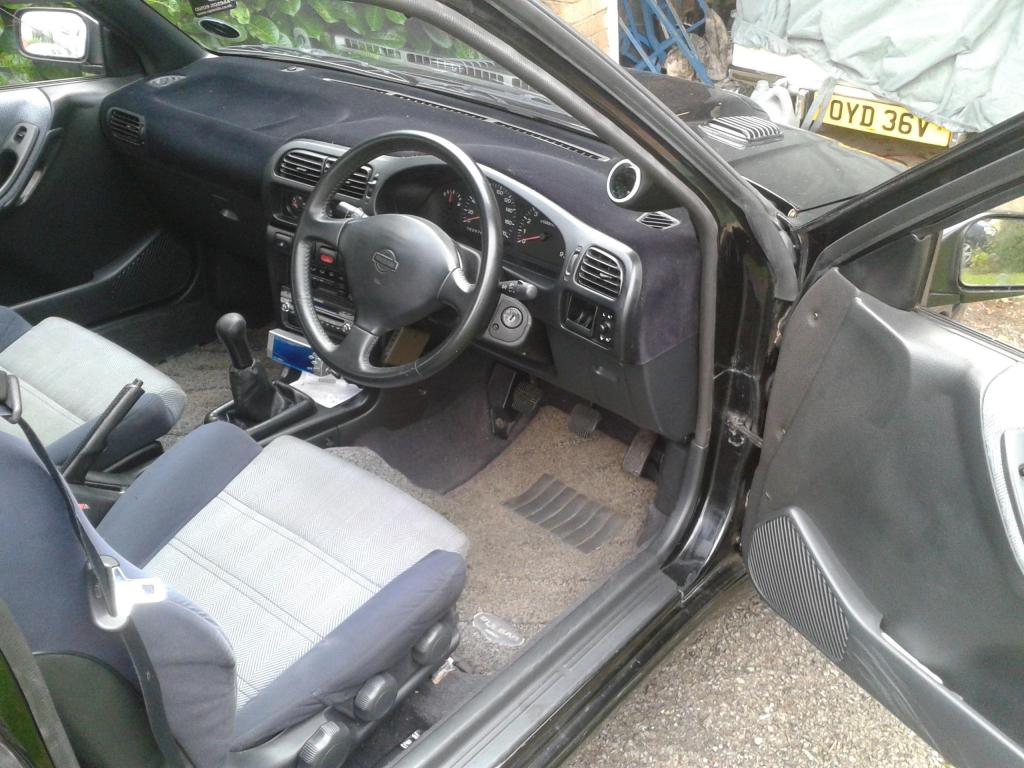 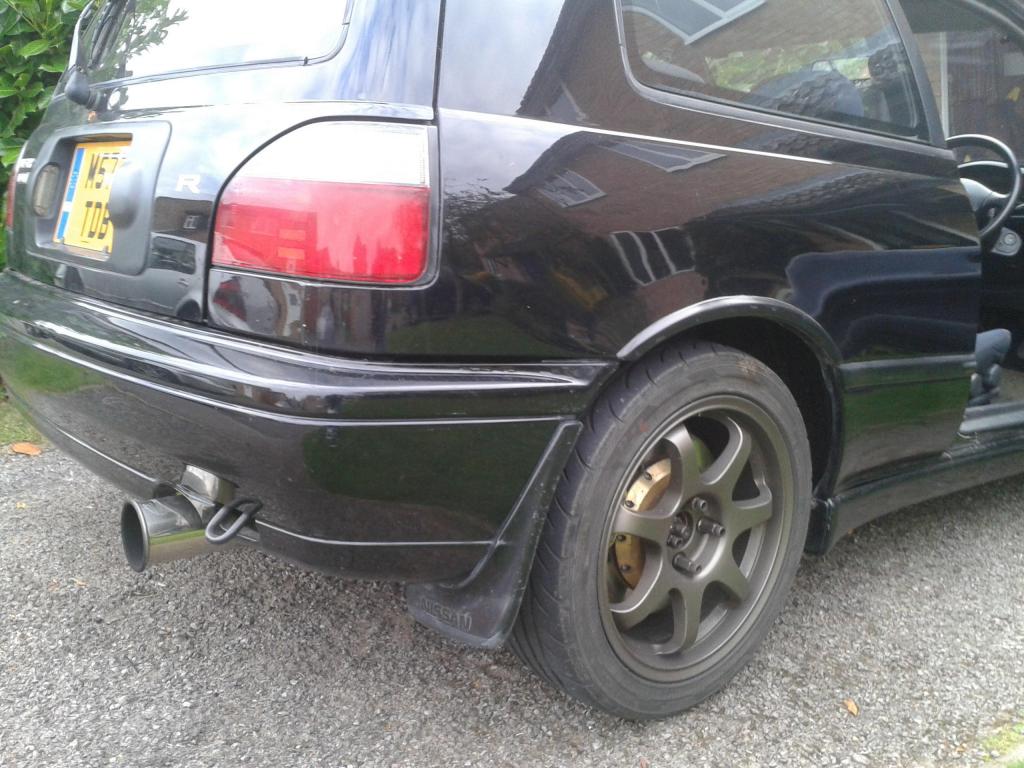 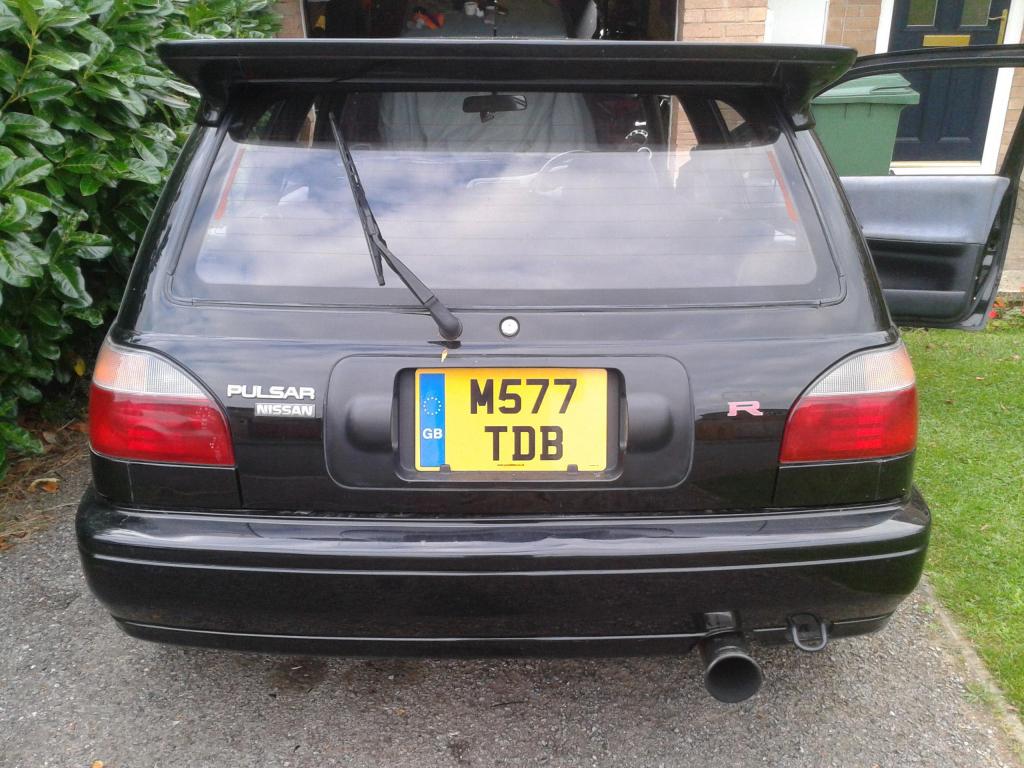 Posts : 638
Join date : 2012-04-09
Location : near bristol
Cheers mate, forgot to add I have some 560cc injectors a ported head and exhaust manifold. steering rack bushes and flocked door cards to go on too but the head is defo a job for next year.

rear end came up awesome after a freshen up

Posts : 638
Join date : 2012-04-09
Location : near bristol
cheers for the comments guys, I'll try and keep this thread updated as I do stuff but I expect it will go quiet as she sleeps over winter. well with the odd run......hoping for snow as never had a 4 wheel drive available for winter fun.

pretty sure that thing isnt a disco spud, if it is, its been modified in its past.. (ie. it shits on a spud! 350bhp@1bar)

Posts : 638
Join date : 2012-04-09
Location : near bristol
i phoned aet turbo when i got it to confirm it was a 2860rs and gave them the serial number and they said it was a 2860rs and they had built it 8 years ago. so suppose that gives plenty of time for it to have been played with to achieve those figures. or its just a freak turbo lol