Posts : 6714
Join date : 2012-03-12
Age : 35
Location : morpeth (Newcastle)
I know what your saying Pete but to me he keeps fucking it up which is costing and has cost you both time and cash and as mr b rightly says if he is missing something or causing it you par kit might already or will be trashed. My par box gets abuse and had no problems with it. And it's had power and torque through it and was used with a auto X car before that

@johnny gtir wrote:Cosmic Dose that offer stand for a certain Geordie if I travel ?

NP, mate, always an honour to help a fellow Geordie!

Posts : 1935
Join date : 2014-01-27
Age : 34
Location : Derbyshire
Well I drain the oil, there are tiny little shavings of thin metal in the oil, not a huge amount but there there....I also have 1st and 2nd gear again! Any way, it's ready for me to take the engine and box out this Friday ready for a visit from mr cosmic on Saturday ! I'll get some pics up when the box is open and can see what's gone off...

Posts : 4044
Join date : 2012-05-05
Location : B's workshop thailand
Clearances as things run tight in places due to increased gear depth. Other normal issue is selector and hub alignments and no effort or poor effort in all shaft/bearing preload check and adjustment .
Speak with par before weekend so up to speed on their current kit build requirements .

We recently built one for Stu (not pulsarstu) on this forum when we had his car in for engine build and mapping etc, was advised by par that clearances are no different to stock gears (this being straight cut synchro kit)
But we allowed a larger clearance when final shimming as straight cut gears in their nature will generate much more heat therefore will expand more so common sense should tell you to allow larger  clearances.
Both cars are now back with their respective owners and have covered a fair amount of miles, both running in excess of 400lbft torque with no issues what so ever so your issues  have to be down to the guy who's building them for you.
So as others have suggested I would look elsewhere at getting the thing built or you'll be for ever chucking money down the drain just as we were a couple years ago when using the said gearbox and engine builder.
_________________
GTI-R-US.co.uk
In association with
Torque Of The South Motorsport

Posts : 1935
Join date : 2014-01-27
Age : 34
Location : Derbyshire
I appreciate what you're saying here, but my problem is this is the only person who has ever been recommended to me for building a box from some one running a big power Evo, I could take it to some one else and have more problems! I litteraly don't know where else to take it atm, I'll see what Neil says on Saturday, and when I do go back I'll be having a word with him so to speak, dependant on what's actually gone wrong

Posts : 4044
Join date : 2012-05-05
Location : B's workshop thailand
Straight cut spur don't create more overall box heat but generally less due to fact no shaft side loads and tooth contact not climbing against each other like helical, plus on the par the needle bearing reduce heat on all non engaged gears.
Only reason spur so good for our R box is fact of no side loads so weak case issue is overcome plus kit has slightly less power loss & they easy make and build over helical and generally less destructive in failure so cheaper rebuild.
Most people believe straight cut spur to be strongest gear but actually for matching size helical wins due to tooth contact ratio being greater .
Race cars use spur because casing and shaft support is simplified and reduces weight along with small power efficiency gain and every bit of power counts in Motorsport .

Like Mr B says, heat generation is down to contact ratio, but also sliding velocity, viscosity and surface roughness.
Gear teeth only have a pure rolling action at their pitch diameters (zero heat generation), but sliding action increases as contact moves towards the tip (drive flank) or down the root (driven flank)

Helicals add an extra axial sliding component, which is why worm gears generate a lot of heat and are very inefficient.

Surface roughness speaks for itself as does viscosity,

Contact ratio is really important (tooth load share) read on;
OEM's design their transmissions as a compromise between at 3 competing failure modes;
-Bending failure at the roots,
-Contact failure (pitting) on the flanks,
-Noise (gear whine)

Top of the priority list is always noise. Its a total show stopper.
Customers perceive noise as poor quality=low sales.

So to reduce noise, contact ratio is maxed out with high helix angles and long slim teeth.
This spreads the load between more teeth which all helps to smoothly transfer load from one tooth to another and is more tolerant of manufacturing and torque variations.
But the price you pay is large, expensive bearings that require shimming and reduced efficiency.

So on our GTIR's, instead of having 50 small helical teeth, you could have 25 massive helical teeth which would carry say 2x torque and still be quiet'ish but you'd double the load at the bearings!
Fitting oversized bearings isn't possible, so you have reduce the bearing loads back to design intent, hence straighter cut teeth are the only answer, because they reduce the axial loads (which tend to be worst for bearing life) and leave only radial loads (albeit bigger).

So bigger straighter teeth carry massive torque without adversely affecting bearing life, but are noisier and have increased pitting risk!

Forgot to mention that as Bob says, shimming is crucial,
Done right, assembly loads are zero at operating temperature so the bearings only sees it's usual bearing loads,
Done wrong, assembly loads could be massive, sometimes bigger than the load they are designed to carry=lots of heat=more preload=more heat=more preload=bang.
So erring towards a larger clearance is much, much safer than erring towards a smaller clearance. 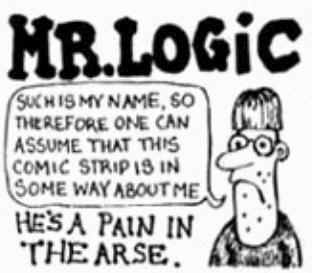 Posts : 4044
Join date : 2012-05-05
Location : B's workshop thailand
Gear design is quite technical stuff. Gearbox is far more technical engineering than most give credit. When you see spanking many of our boxes get it amazing to think they can last over 100K miles & capable do most of that at around 300+hp range in right scenario.
Have fun at the weekend sticking you fingers in petes box lol

Posts : 8355
Join date : 2012-03-04
Age : 104
Location : DONT KNOW ANY CLUES???
Yes can see what you mean with regard to friction and heat so in theory that is very true what you have said.
But the one thing you have not mentioned is that most people that fit a straight cut gear set are doing so because they have significantly increased the power and therefore torque output of their car, on top of that they are much more likely to use the car on track.

So although you are correct in what you have said in reality the temperature of the gearset and all components is far likely to be much higher than that of a road car with semi helical cut gearset.......Hense the need for extra clearances to minimise preload and heat generated which will in turn cause damage to gears and components in no time at all.
_________________
GTI-R-US.co.uk
In association with
Torque Of The South Motorsport 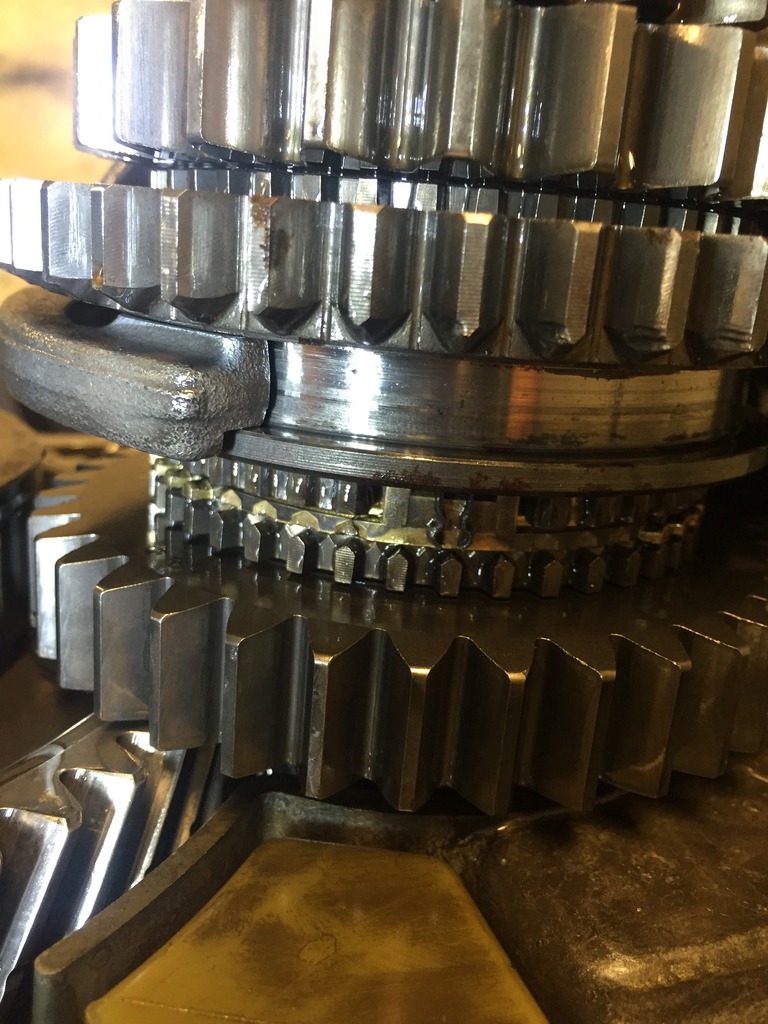 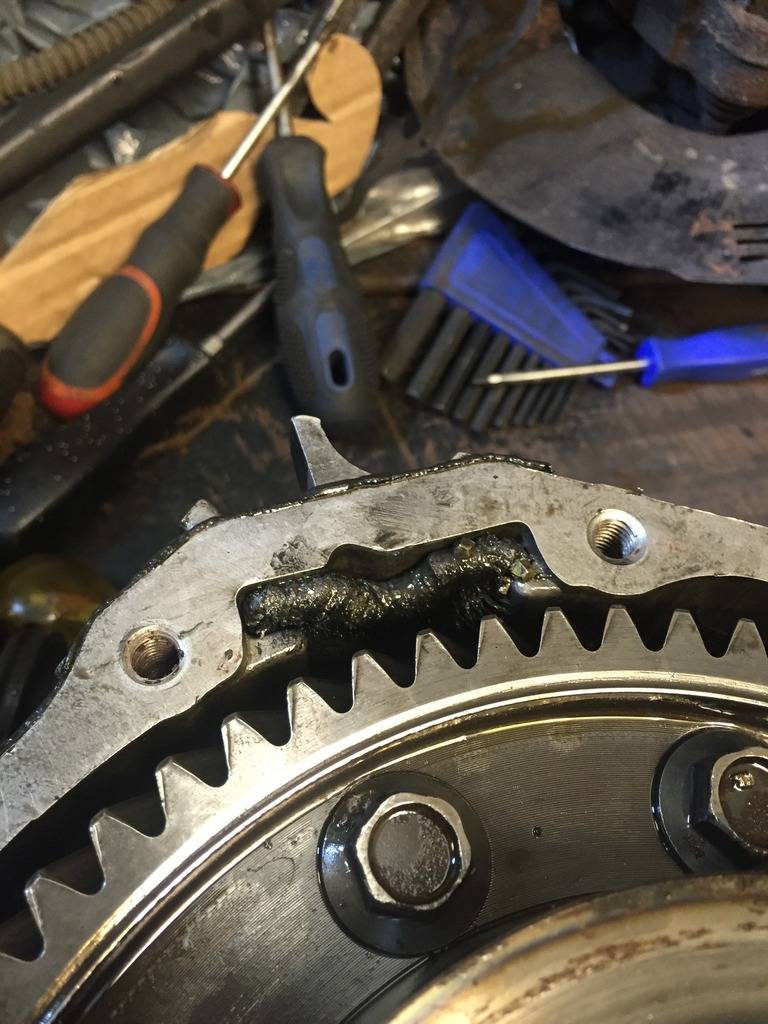 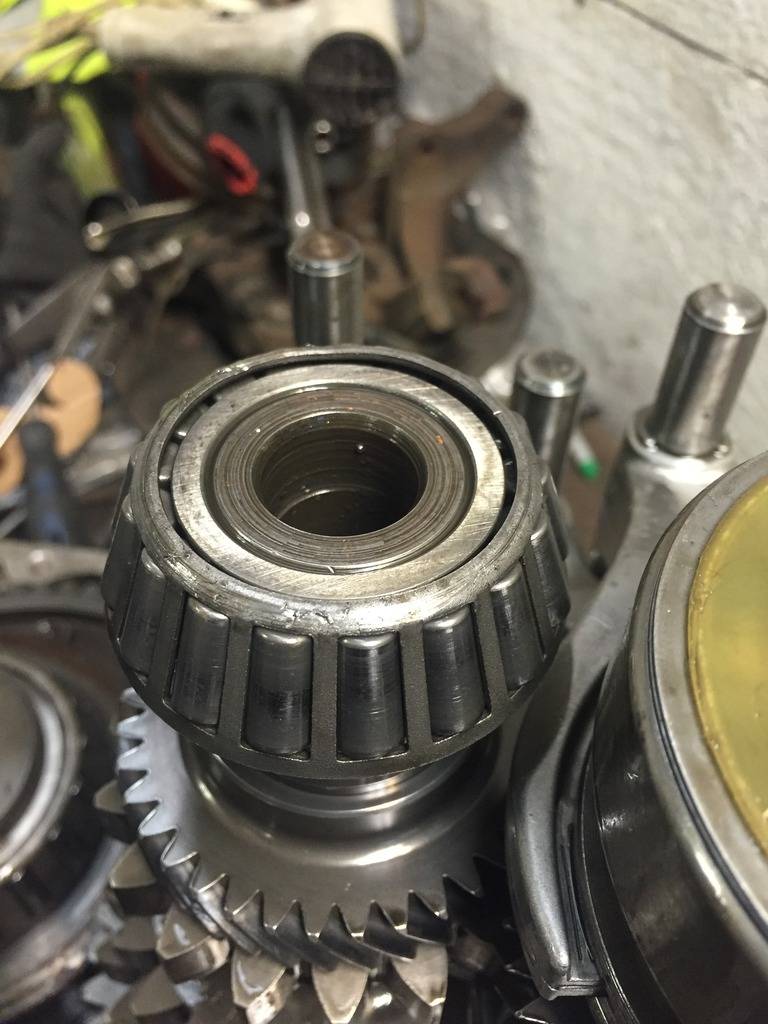 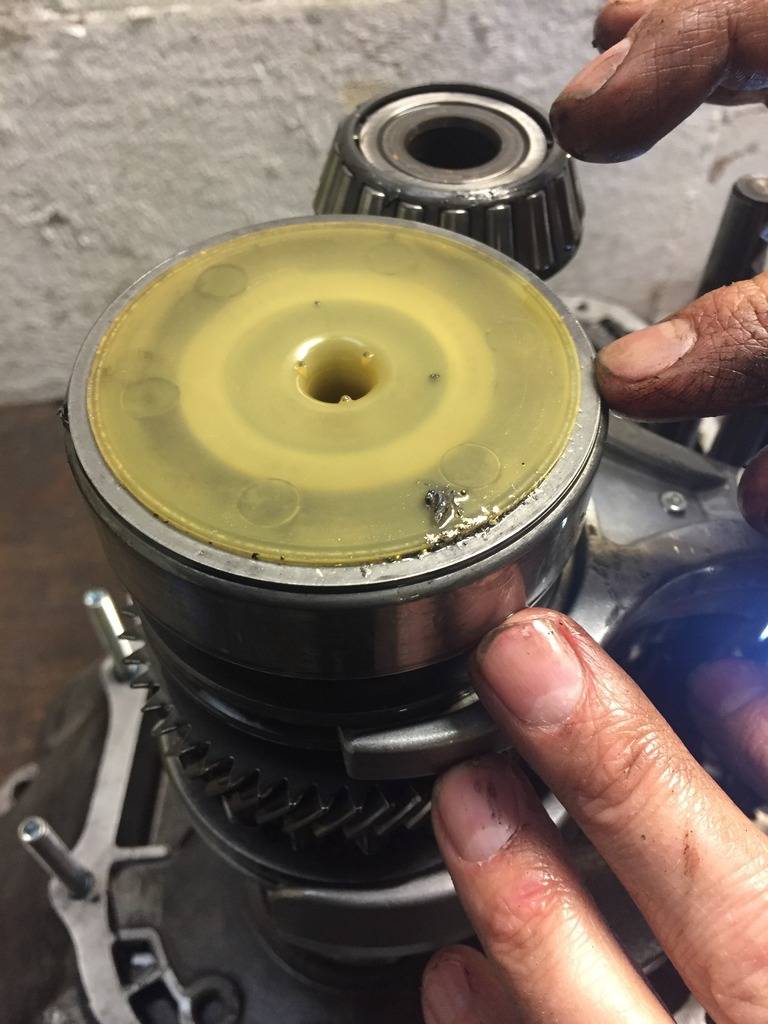 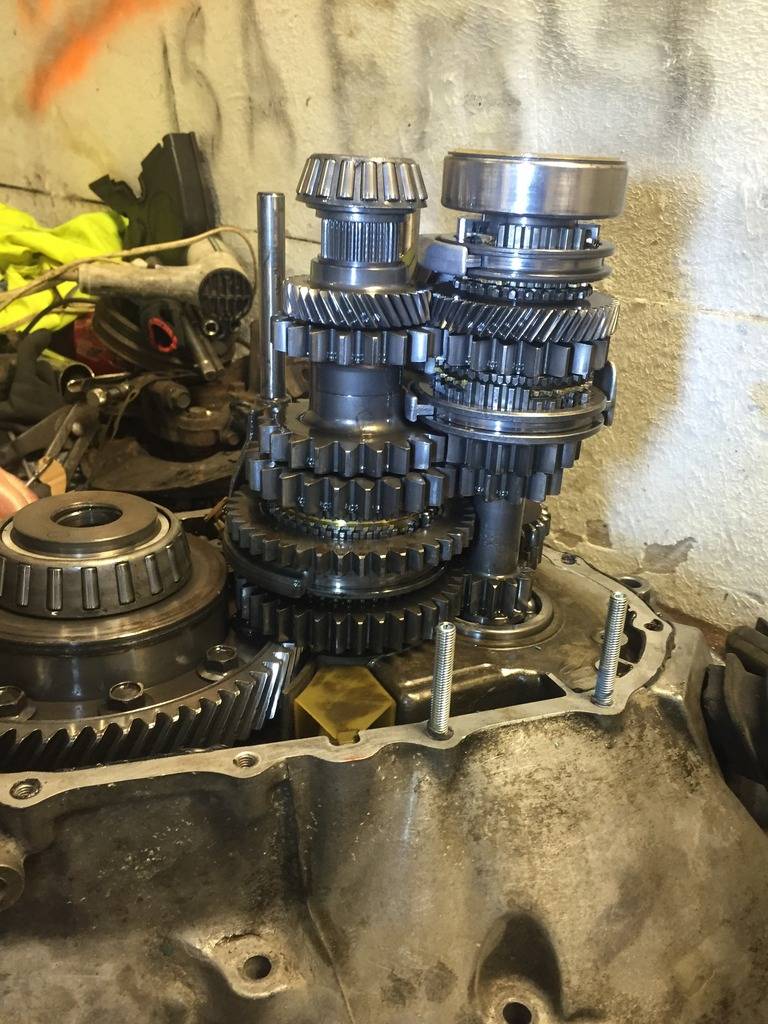 Well Neil very kindly came up at the weekend and had a look at my gearbox for me and this is what he found, 1st 2nd synchro with missing teeth, damage to the bearing, and very very worn selectors that were out of there tolerances, I'm sure he will be able to explain better than myself when he sees this.
But he has very kindly offered to rebuild the box for me! Going to price up new synchro's from Nissan

i would still keep it in factory shimming range but just top end of clearance, too much clearance leads to taper bearing inefficiency & increased wear & less alignment precision throughout gearbox components. Even in our asian climate boxes don't suffer from excessive heat build up, good oil & right levels help massively as overfilling produces lot of heat on fast track long use.

selector alignment & wear is common issue & generally why 3/4 selectors get broken so not surprised on those findings after busted forks you had .
I still think 1st/2nd hub was loading/engaging slightly due to selector wear/alignment/build issues when you in 3rd & grinding you heard was the 1st/2nd syncro assembly .
Most run of mill gearbox builders are sloppy as they basically use to making box usable quickly & cheaply so it becomes normal procedure reusing lots of used parts even when not in great service order. many don't even check/adjust preloads for basic exchange repairs as keeps build time to minimum.
Hopefully more new parts and a very anal precision mr cosmic rebuild will have you sorted on the gearbox finally ...
He could start a business as name would be quite good: cosmic gearboxes :-D