Posts : 788
Join date : 2013-09-21
Age : 40
Location : N. Wales
So fixed the clutch cover problem as you know.  Last week got my mate to press the clutch pedal several times soon as the engine was mounted in the bay and all was fine no clearance issues and pedal working as it should.

Now today got the last few things buttoned up on it pressed the clutch and the pedal stayed on the floor then slowly came back up? Bled it, still the same.

The only thing I did after my mate pressed the pedal several times was to put the dust cover boot thing back on the fork.  Decided not to take the slave off but just pop the rod out

once boot was on I found I couldnt actually get the rod back in so ended up unbolting the slave.  Now Im wondering have I forced fluid back up to the master and knackered the seals or damaged the slave?

Ive just been back in the garage after reading how to bleed the clutch in the manual, said pump several times

when i did this errr this happened 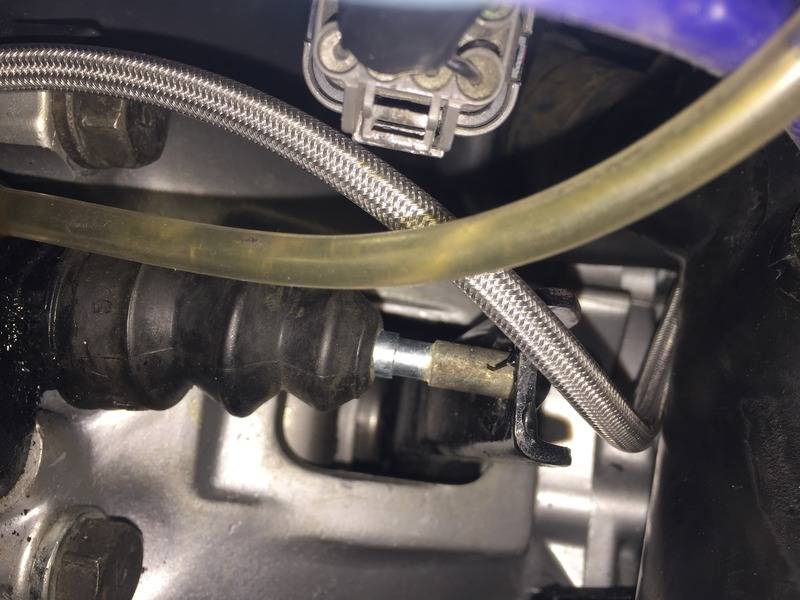 the pedal went rock solid because the fork was pressed against gearbox.  Unbolted slave and pulled it off, fork released but the slave looked like this 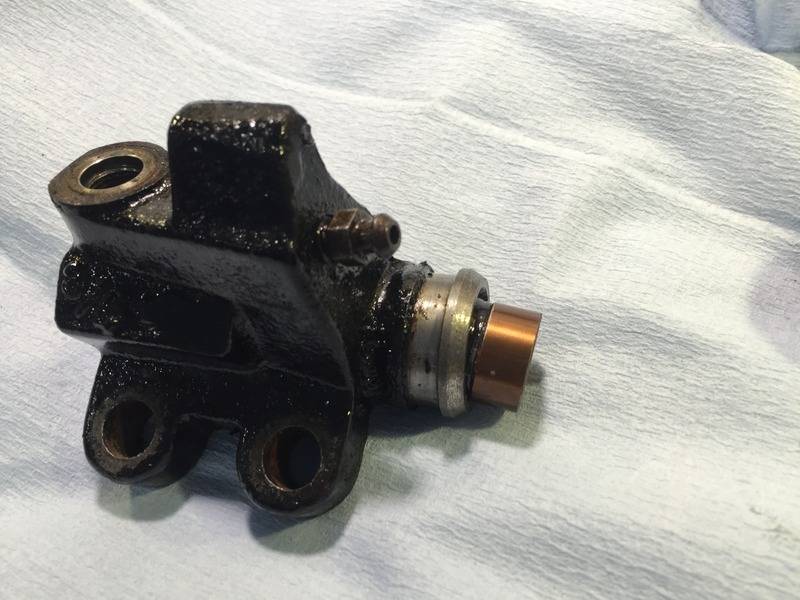 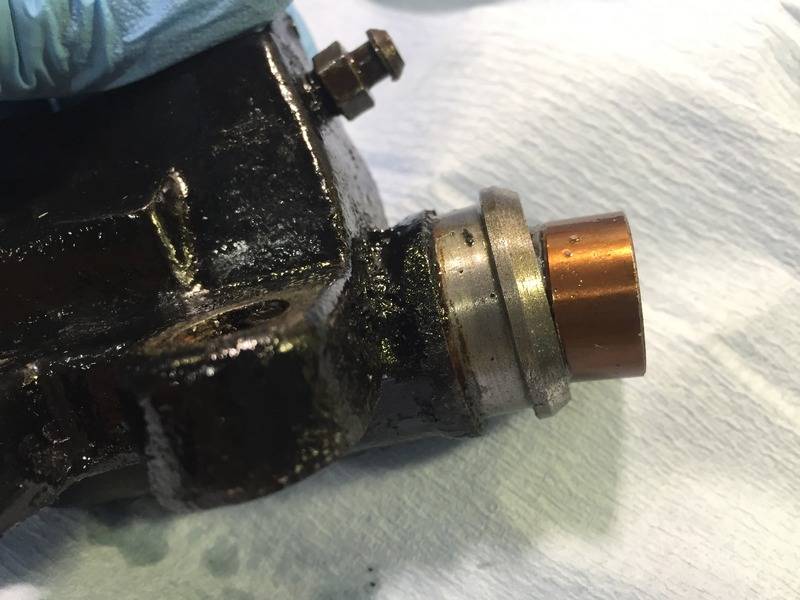 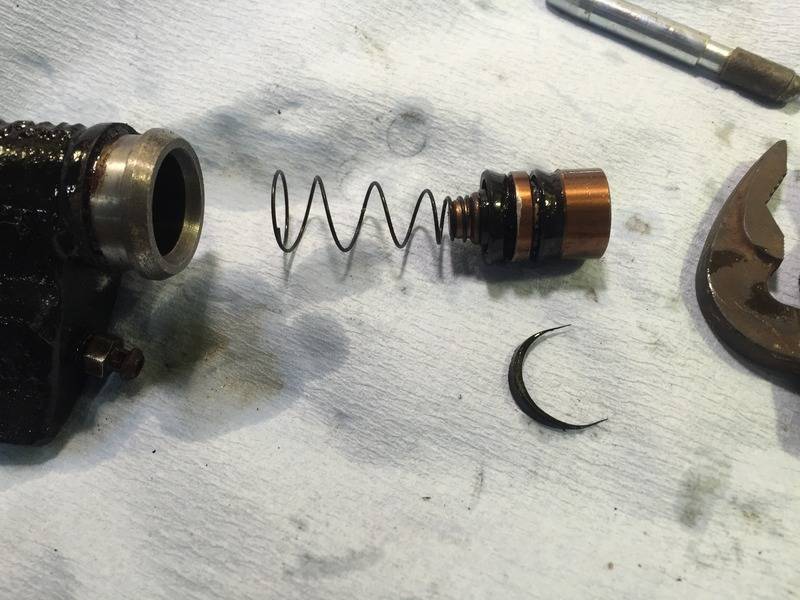 chunk of the seal has come away, but this may have just happened? 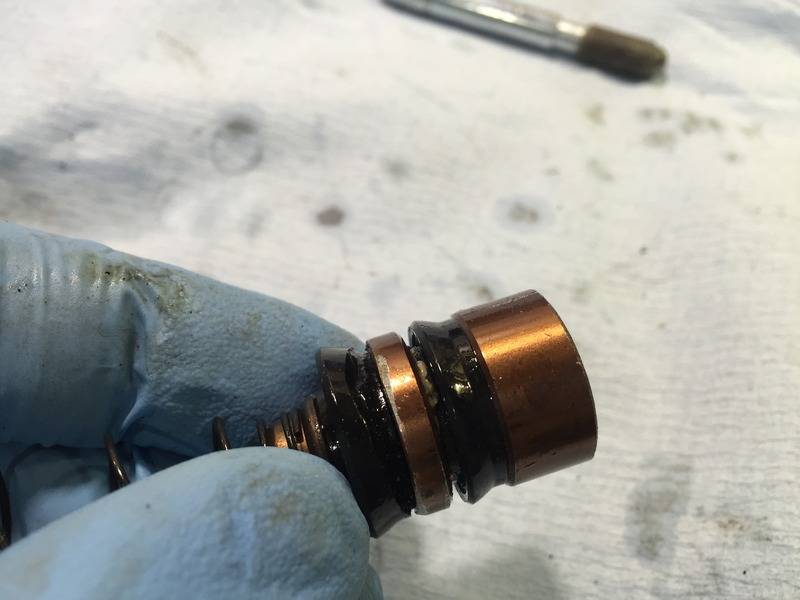 From what I can understand the oil is having a hard time getting back up to the master cylinder when releasing the pedal.

Do you think this was the route cause of the main problem?  The master cylinder was a new one 10 years ago, ive just renewed the solid line and flex line so there ruled out.

I did notice the pedal the other day when I started it up and posted the vid of the wheels moving, but just assumed it needed bleeding.

Posts : 4044
Join date : 2012-05-05
Location : B's workshop thailand
Like Ducie pointing out the piston has travelled out too far . Need have look why, could be due hassle you had putting boot on bit also could be new clutch difference .

Am I right in thinking the slave will only travel a predetermined distance according to pedal travel in car no matter what clutch is fitted. If the slave cylinder has stuck on its return then I've manually pulled pedal back then pumped again causing piston to travel out further. So with me doing this process a few successive times its acted like a ratchet.

I going to order a new slave, looking inside where the piston goes is worn, slight lip one side.  Hopefully this cures it

Posts : 4044
Join date : 2012-05-05
Location : B's workshop thailand
You are right in fact slave stroke is fixed to master fluid displacement of full clutch pedal stroke.
If for some reason the cover springs protrude further or release bearing is thicker then gap between slave and fork could be greater thus piston travelling too far up bore .
If this was to be the case then a custom length rod may resolve it .

Posts : 788
Join date : 2013-09-21
Age : 40
Location : N. Wales
It worked fine first time round though that's what I don't understand. Will get a new one ordered today and see what happens when fitted. Can always make a new rod on the lathe if need be.

The pedal slowly returns up then last cm springs up fast... So removed master cylinder to check that and tbh it looks fine, little bit of black sludge in there but nothing major. 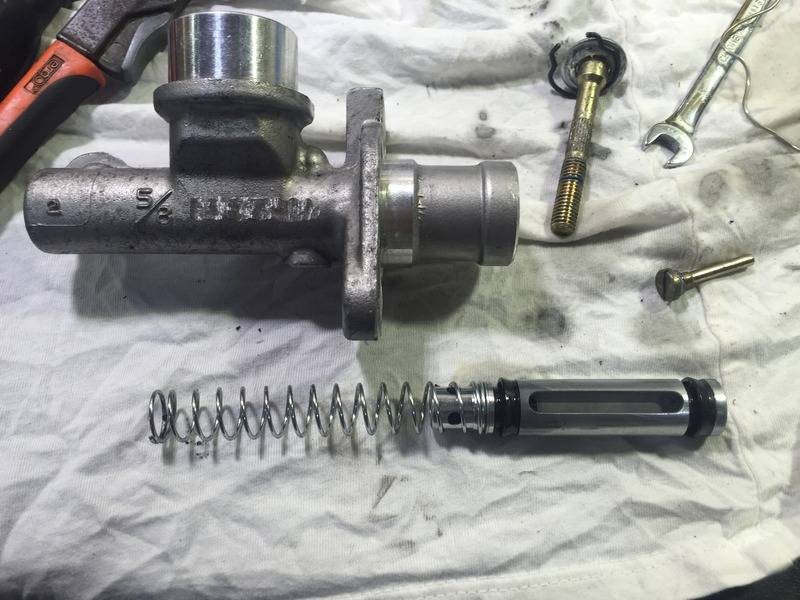 This part moves freely in the cylinder, creates pressure where the solid line connects. 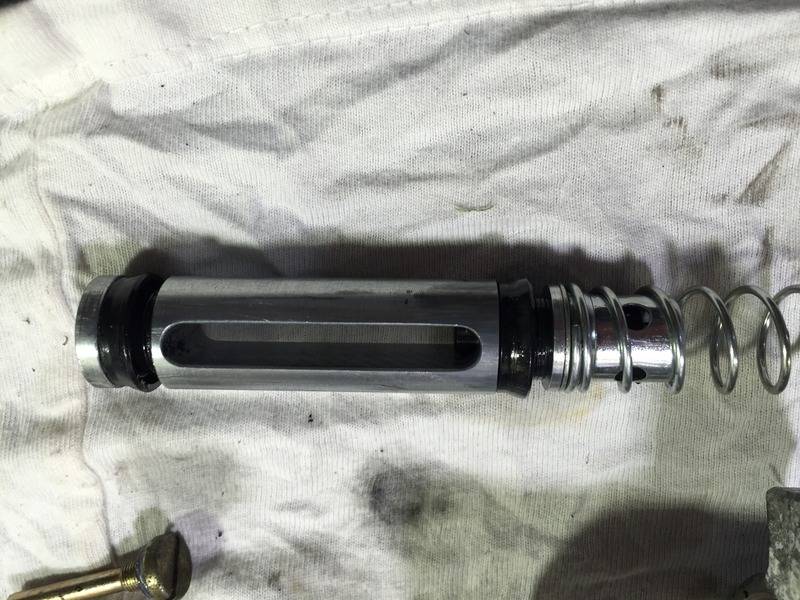 No marks inside it 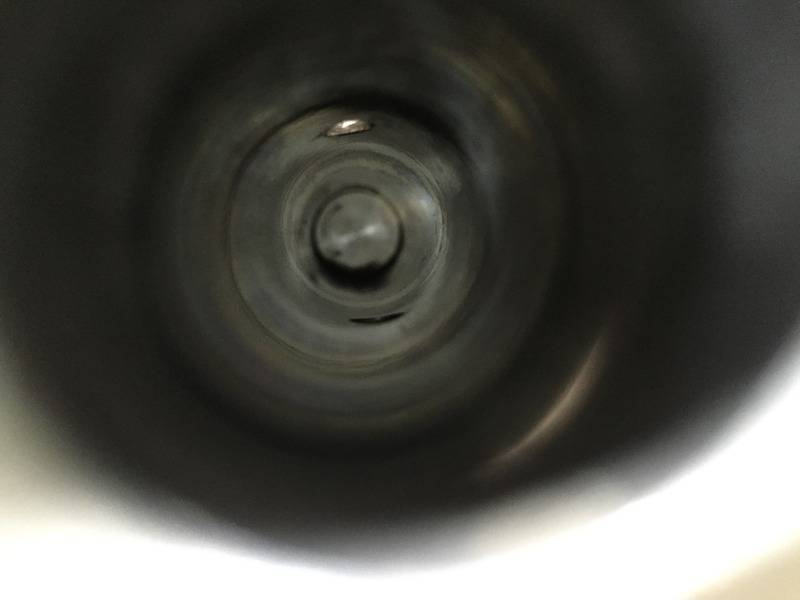 I just don't understand how one minute it was fine then the next not? I'm really hoping it not something to do with the clutch cover not springing back fast enough

Posts : 4044
Join date : 2012-05-05
Location : B's workshop thailand
Dot 4 fine ...
My suspicion would be cover or release bearing draging on shaft .
Possibly noticeable/linked to full travel range now available due to modding bell housing & cover .
Want a helper push clutch while you monitor release lever and try feel if notching return coming from clutch.
While master out I would either bang in new seal kit (12gbp roughly) or new master as at age I always do master/slave and flexible hose when do a clutch or got one part failing & all look old parts .

Posts : 788
Join date : 2013-09-21
Age : 40
Location : N. Wales
To rule the bearing and cover out can I make an adapter into the slave to use compressed air? Put a gate valve in the line and turn the psi down on the reg just enough to operate it? Also thinking of rigging up a temp line from master cylinder to slave to rule out current pipe work, although it's all brand new, never know if there's a bit of crap stuck in the pipe...

Posts : 788
Join date : 2013-09-21
Age : 40
Location : N. Wales
I wanted to try something before putting the master cylinder back in, to rule out the copper pipe and braided hose so I made up a rig to bypass it, using a new piece of copper pipe and the old rubber flex pipe: 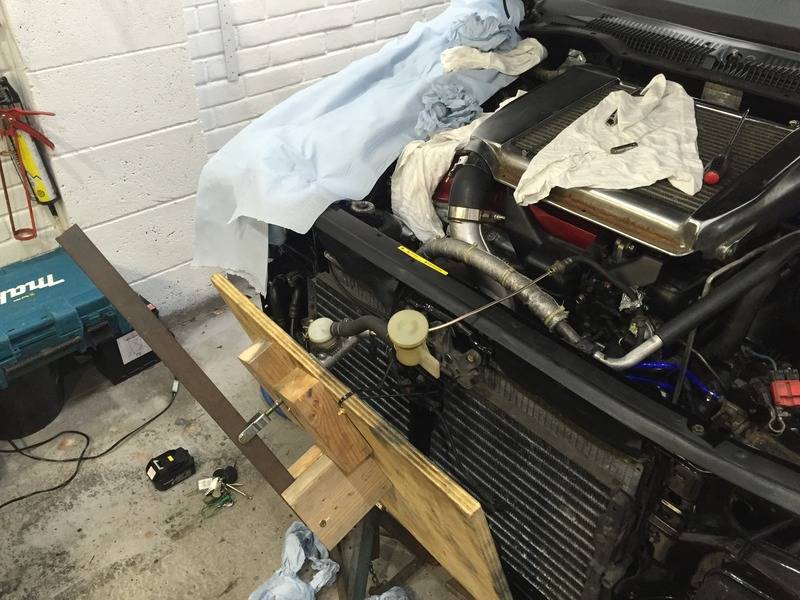 Surprisingly it worked! and more to the point the clutch fork released quickly, so I can only assume from this that a bit of debris is stuck in the braided or copper pipe

I'll get a seal kit for the master cylinder as Mr B recommended, flush pipework out and hope for the best, at least I know wheat it is now!!  Cheers for the help again chaps, really appreciate the quick replies

Posts : 4044
Join date : 2012-05-05
Location : B's workshop thailand
Hope it is as that would be easiest to resolve . Bit of debris or assembly/manufacture issue could be acting bit like a 1 way valve .

Going to put the new braided line on the rig to rule that out. Will check the copper line, make sure I haven't bent it too much causing a restriction.

It turns out the HEL braided line is the problem!! Brand new but some reason is restricting the flow.  Comparing against the orginal the hole is much smaller 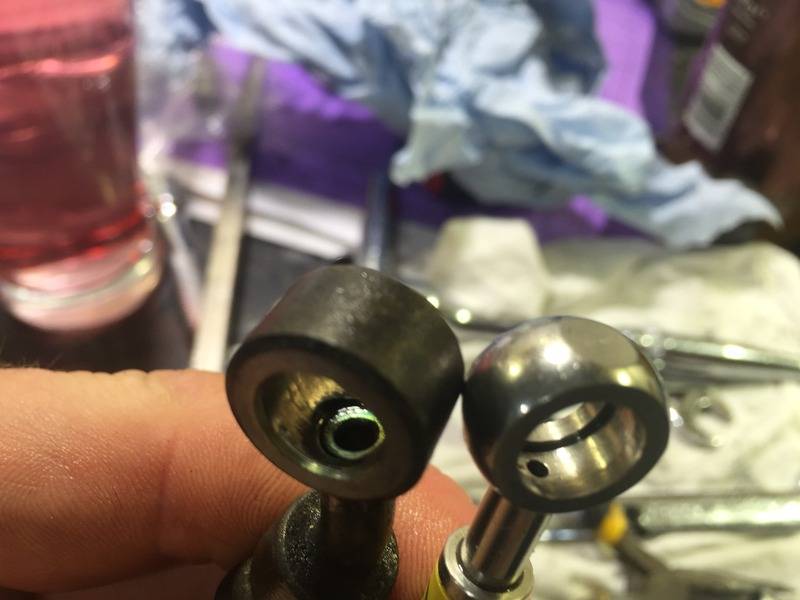 So put it all back together with the old flex line fitted, filled it up for the 20th time

pressed the pedal and works fine. Be interesting to see what HEL say when I email them! Not happy with the amount of hassle this has caused and knackered the slave in the process.

Posts : 4044
Join date : 2012-05-05
Location : B's workshop thailand
Yeah that is super small bore on the fittings .
I get lines made up and not had issue so must be hel fittings issue for the application.

Posts : 1141
Join date : 2015-10-04
Age : 47
Location : Warwickshire
So that's two replacement parts you've bought and both are different to OEM?
That's bad luck but also quite worrying because how are you meant to spot these tiny differences unless you spend hours inspecting and measuring new parts that you shouldn't have to do.

Glad its all sorted too.

I must admit I really never thought that hose would be the issue! I was so close to ordering a new master cylinder from ICP yesterday, so glad I didn't! It's already cost me a slave cylinder, because it was retracting quick enough I ended up over pumping it causing the piston to pop out and knackered seal

But as you say, you buy an item that's advertised for the GTi-R you shouldn't need to check every last measurement before fitting!

Posts : 6714
Join date : 2012-03-12
Age : 35
Location : morpeth (Newcastle)
I just threw one away . Used it on my brakes wonder what size it was. I liked hel as there full stainless fitting and have the rubber to mount to suspension. Never noticed on my brakes and sure I have one on one of my cars on the clutch. Will be checking tomorrow. You need to e mail them mate see what they say

Was it clutch or brake line ? As some people use brake line on the clutch not sure if there is a difference