We are sponsoring the young lad 'Ross Connolly' who's one of Extreme 22s drivers in the BTRDA rallycross championship........more interestingly for you's is that hes entered his first season driving a Nissan Pulsar and is up with some stiff competition in the modified 4wd category.
There is a very limited budget with the car but weve been working hard to try make his car competetive in this category. The other thing to note is that Ross is only 16 years old (hasnt even got a normal drivers license) and hes up against some very good experienced drivers:shock:
As well as getting the car ready for its first outing I have been helping Ross with a few tips ive picked up over the years to improve his driving skills and make him faster. The Pulsar needs to be treated differently to most other cars in order to be quick and in some ways it goes against the driving rule book of smoothness = faster

Im sure some of you that have had their cars on the limit on track will know what im talking about lol.

so got another fitted straight away as well as ironing out a few other teething issues with the car. The car is running a fair few mod's but is still running a stock turbo, maf and injectors with boost set at 1.4 bar so shes reasonably quick

afr's are good still so could even run a tad more boost but the stock T28 cfm wont really give much more so left it at that rather than running tubby beyond its limit with no real gains.
I have test drove the car a few times on our private test track and she is one very good handling and extremely quick little car now after making a few alterations.
Ideally the car needs better brakes, straight cut gearbox a bigger turbo, ecu management & mapping which we will be sorting in a week or so, then we can really start to push hard and hopefully destroy the competition.

I was at an army reunion on Friday / Saturday in Gt Yarmouth so after two days of mucho drinking and merryments i headed up to Blyton park late saturday where Ross and Extreme22 were staying, they had the lorry with big marque already setup so i set about making a few last minute checks and adjustments to the car, once finished (early hours Sunday morning) got a bit of shut eye ready to be up early to get car weighed, scruteneered, fuelled up so was all ready for Ross to drive

Basically there are 4 heats after a practice session which determine your grid position in the final.

So heres a few pics (got loads & vids) but no time to upload them all at the mo sorry! 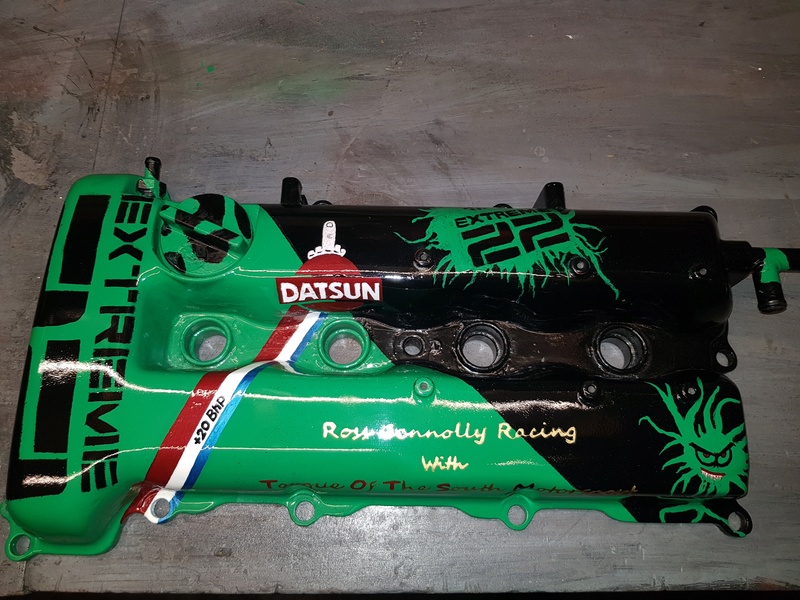 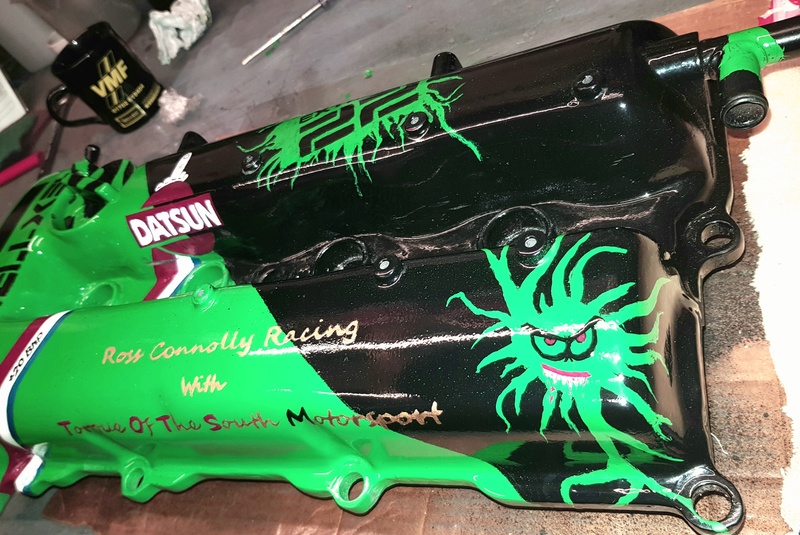 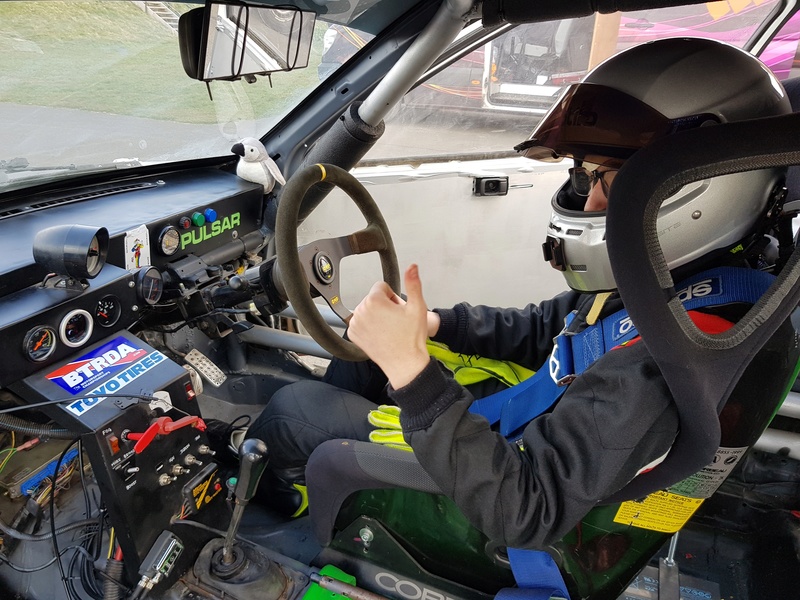 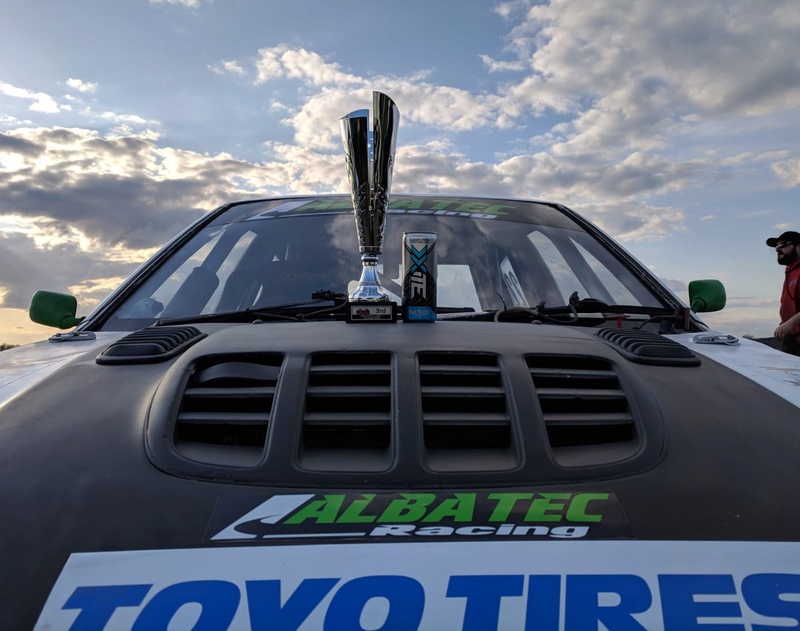 Some of Blyton over weekend 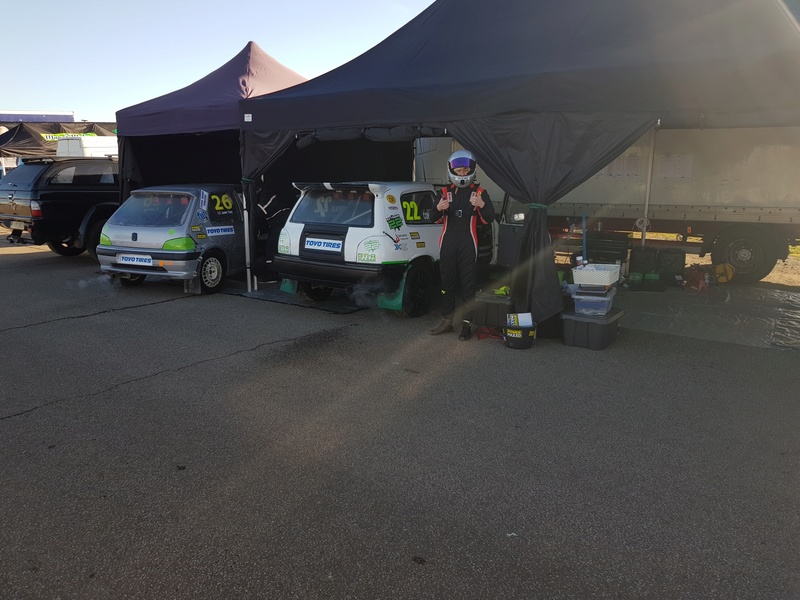 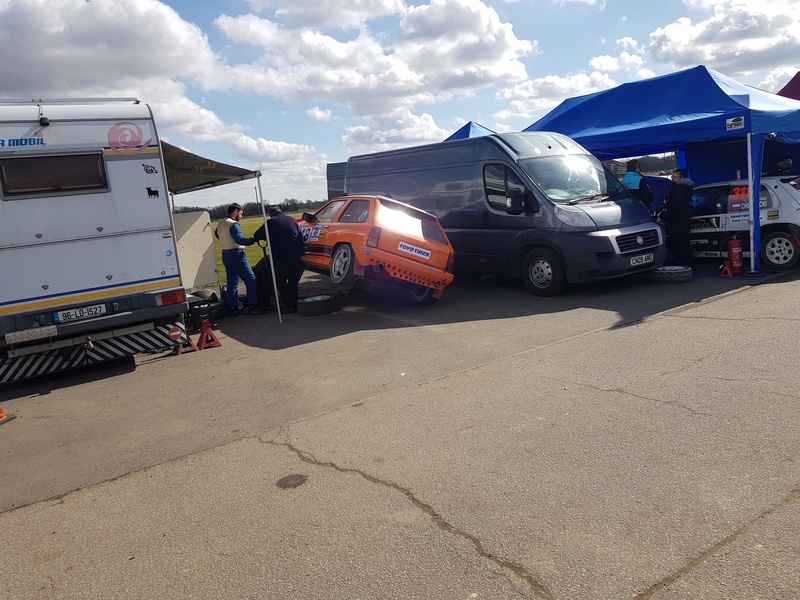 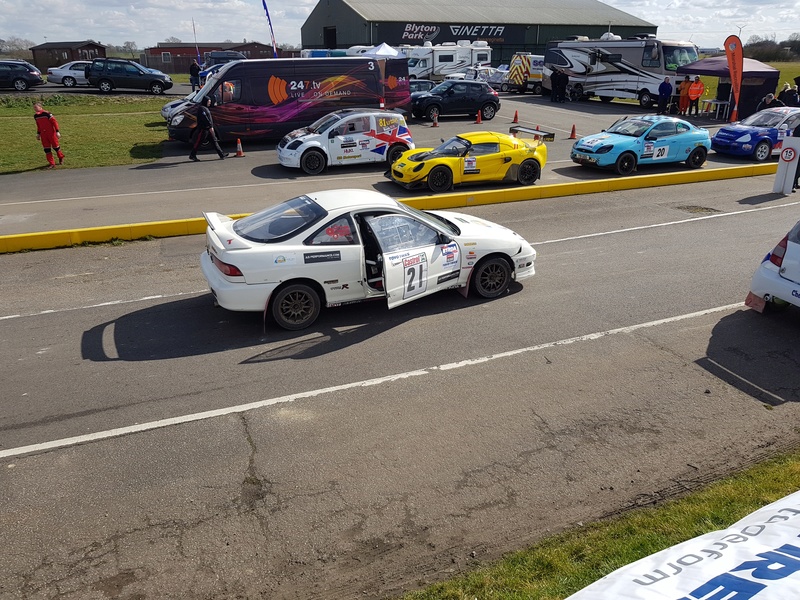 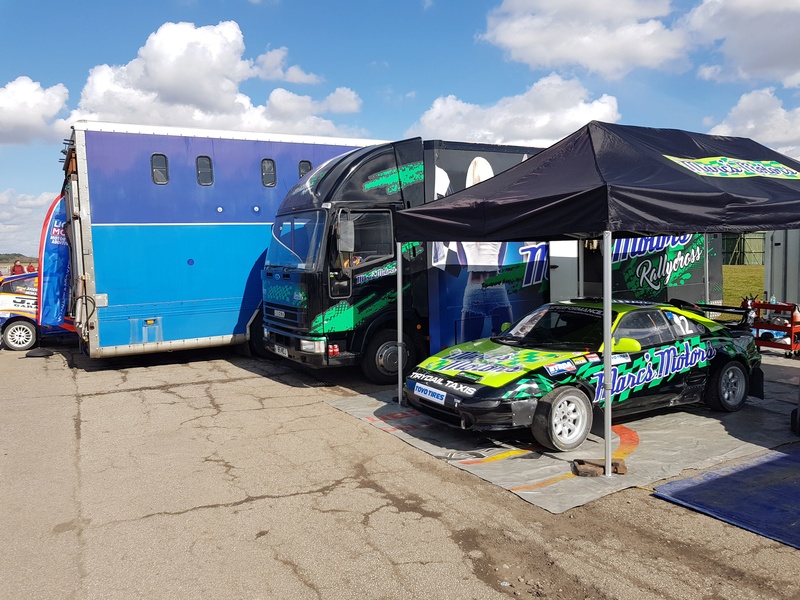 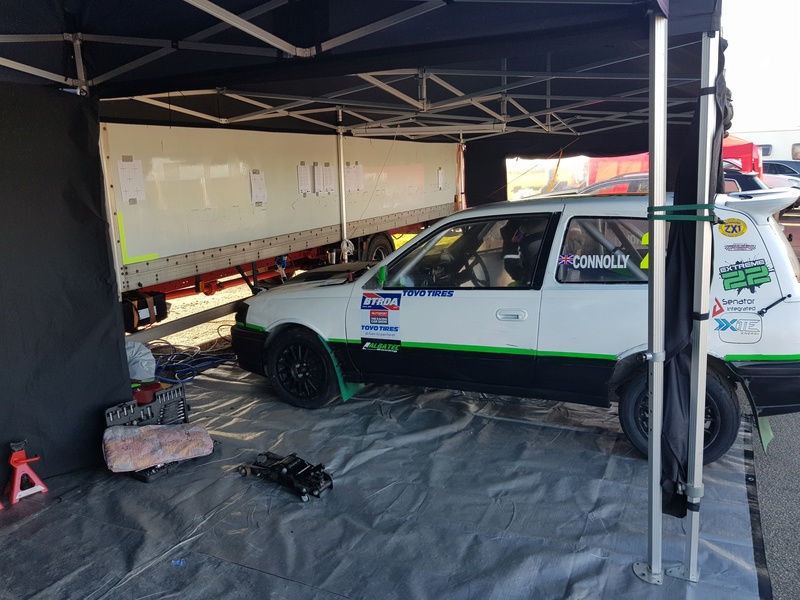 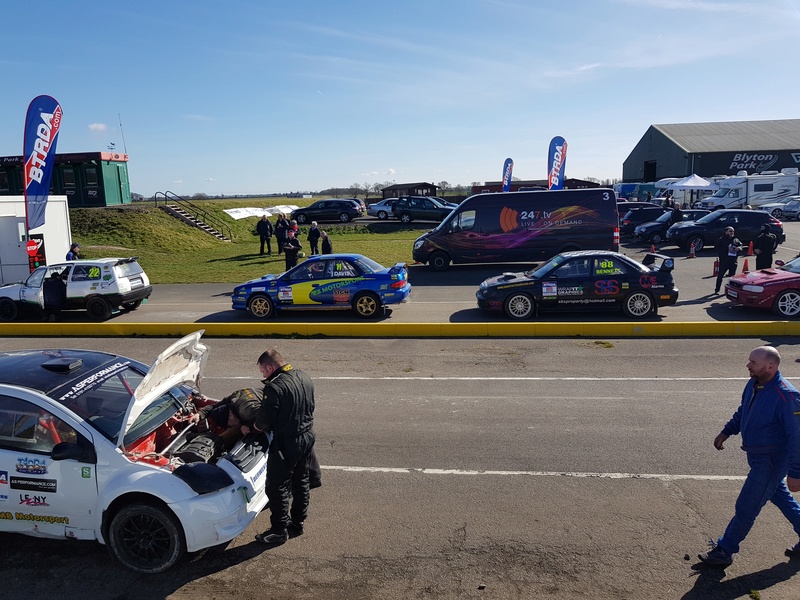 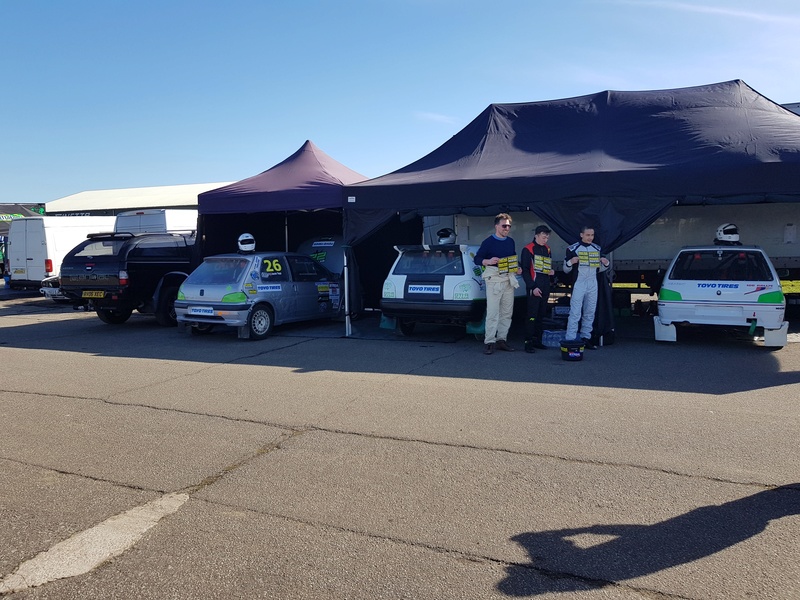 I for one am extremely proud of the lad Ross!
Hes not a know it all, he listens to what hes told & takes onboard advice given, doesnt make excuses if hes made an error and just a generally nice lad who im sure will go far and move on to better things with his racing and motorsport in general

I will do all i can to help him on his way, he's already gained commited interest from other sponsors which is no mean feat so this will help financially with the huge running costs involved.

So good news for all the Pulsar lovers out there Go ROSSY, GO ROSSY

Posts : 451
Join date : 2012-03-14
Age : 40
Location : Kent
Great write-up - thanks for the update Bob !
Amazing to see a young lad take our favorite old banger and with your help make a competitive car out if it and by the sounds of it do very well in Round 1 - Hats Off !
Well done to him and all involved !
Be great to keep this thread going with updates.
Keep us posted on future Rounds as I'm sure members would happily go along and support if possible.

Posts : 8336
Join date : 2012-03-04
Age : 104
Location : DONT KNOW ANY CLUES???
Yeah cheers Al il try keep this thread updated from now on, he needs as much support as he can get from you guys.........when i used to race bikes i know how much difference it makes when you have supporters there watching, it gives you an extra lift as you dont want to let anyone down

Posts : 4053
Join date : 2012-05-05
Location : B's workshop thailand
That's cool, great see a R doing well and a young lad doing well .
With those things sorted on car he would be 1st/2nd pretty easily I would think .
Good publicity for the R community too ...

Posts : 22
Join date : 2016-01-12
Well done so far boys,this will be good exposure for our little cars and for the young lad,good luck to all involved and hopefully if you keep us updated Bob amongst all your other commitments,it should make for a good read.

Posts : 6733
Join date : 2012-03-12
Age : 35
Location : morpeth (Newcastle)
Great to see him getting out there with the R. The fact he is doing well is a added bonus and good on everyone supporting him I know bob and Stu couple others have both helped him on his way

Posts : 4844
Join date : 2014-07-22
Location : Australia
Awesome update mate, been waiting awhile to hear how things are going. Great to see a young guy getting support. Its great exposure for the R community. Best of luck

Going the same route as me with curcuit racing and a uhmmmm! #####

Weve just purchased a race transporter 12 ton motorhome with a big workshop at rear and loading for possibly 2 cars, the things almost 38ft long so probably bring Ross with us to events etc
_________________
GTI-R-US.co.uk
In association with
Torque Of The South Motorsport

Posts : 4053
Join date : 2012-05-05
Location : B's workshop thailand
another sell out, bracpan, bardy and connolly. only R's left in motorsport are real small club level and only 2 or 3 events a year that no one knows about . Shame as was doing lad and R good publicity .

@GTI-R US wrote:Yeah hes decided to sell up and dare i say

Going the same route as me with curcuit racing and a uhmmmm! #####

Weve just purchased a race transporter 12 ton motorhome with a big workshop at rear and loading for possibly 2 cars, the things almost 38ft long so probably bring Ross with us to events etc

Shame, he was doing ok.

Nice on the transported.